In Paul Haggis's Los Angeles, good and evil Crash into one another. 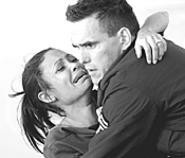 When it comes to the human heart, nothing is all black or all white.
Much of Crash, an L.A.-stories portmanteau about the suffocating embrace of racism, is hard to watch, harder still to listen to. Its characters -- the creations of co-writer and director Paul Haggis, but also of people who live next door and perhaps even inside you -- say and do things they shouldn't. Theirs are internal monologues shouted over bullhorns -- lines peppered with racial epithets and soaked in the greasy sweat of hatred for anyone who gets in the way. Theirs are the actions of people who do bad things while believing they're also doing the right thing. These folks -- cops and shopkeepers and carjackers and wives of district attorneys and just average people living average lives -- have lost their sense of right and wrong, and merely do and say what they must, in order to grope their way through the days and nights in a city of angels populated by devils.

No one is safe, and no one is entirely innocent or guilty: A gun-store owner (Jack McGee) accuses a Middle Eastern shopkeeper (Shaun Toub) of being a terrorist ("Yo, Osama, plan a jihad on your own time!"), the Middle Eastern shopkeeper suspects a Hispanic locksmith (Michael Pena) of breaking into and trashing his store, the Hispanic locksmith is accused of being a gang member by the white woman (Sandra Bullock) whose locks he's changing. Two young black men (Chris "Ludacris" Bridges and Larenz Tate), storming out of a restaurant after being made to wait two hours, accuse white folks of being scared of them, only to then carjack a white couple (Bullock and Brendan Fraser) climbing into their gleaming new SUV. A white cop (Matt Dillon) pulls over a black couple (Terrence Howard and Thandie Newton) because they are black and verbally humiliates the husband while feeling up his wife; the cop's partner (Ryan Phillippe) is appalled and asks for a transfer, only to commit an act of violence against a black man because his skin color makes him suspicious, no matter how innocent his actions or intentions.

And on and on it goes, this vicious cycle of viciousness that consumes most who step in its path. Yet you cannot and will not despise these people, because Haggis (writer of Million Dollar Baby) presents them not as caricatures, but as flesh-and-blood, fucked-up folks trying their best to be their best, despite their prejudices. The whole film grows out of a line uttered by Dillon, playing a cop named Ryan, whose actions are loathsome, but who is not entirely unlikable or unredeemable. "You think you know who you are," he tells his naive young partner, Hanson (Phillippe). "You have no idea." The line applies to the entire cast, from Don Cheadle's detective Graham, a good man harboring an awful secret -- and his own pack of prejudices -- to Ludacris's carjacking hood, Anthony, to Fraser's upright district attorney, Rick. There's bad to be found in the good people and evil lurking even in the righteous.

Like Magnolia or Short Cuts or even 13 Conversations About One Thing, Crash is built upon the principle that we're all connected to the strangers who pass through our lives for no more than a second. There is no such thing as coincidence, only fate; we're meant to crash into one another, to take something from each other, to touch each other's lives as we try to figure out our own. When Ryan assaults Newton's Christine, he nearly ruins her marriage. After the assault, she shouts at her husband, Cameron (Howard), claiming that he acted weak by letting that cop stick his hand up her skirt; she blames him for it -- damns him for it. Cameron will not stand for her insults: "You need to find out what it's really like to be black," he snaps at his light-skinned wife, who reacts as though she's been violated all over again. But Ryan and Christine will meet again, under different circumstances, and the villain acts like a hero this time, restoring the faith of a woman who will now have no idea what to believe ever again.

What makes Crash so gripping -- so terrifying in spots, so moving in others, and even a little funny at times -- is how nothing happens as we think it will. Tragedy befalls those nearing redemption, while it gently passes over those who have gone out of their way to meet a bad end. Those we think kind exhibit casual cruelty, and those we think awful reveal humanity when least expected. And the film allows people to evolve, to actually learn from their mistakes and pitiless ways, and does so without proselytizing. Indeed, it finds room for wonderful jokes too, such as when the character played by hip-hop star Ludacris explains that "hip-hop is the music of the oppressor."

Haggis, directing a stellar cast in what is, ultimately, an important movie, reminds us that it's the small disasters that ultimately do us in, that our demises come not with a big bang, but a quiet thud -- that moment when we sell our souls for the promise of something better, that moment when we say something we can never take back, that moment when we look the other way and invite doom through our door. Crash reminds us that we're not safe from the outside world or from ourselves -- that we're all susceptible to foolishness, selfishness, avarice, cowardice, and, most of all, ignorance.