Three great directors serve up a sampler of love and desire. 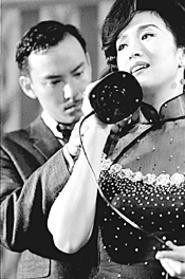 It's titled "The Hand," but it happens in the hips.
Eros is not a single film, but three, each roughly half an hour, joined in a common goal. The first segment was made by Wong Kar Wai (In the Mood for Love) and the second by Steven Soderbergh (Traffic, Erin Brockovich). The final piece was directed by the legendary Michelangelo Antonioni, who is still filming at 93. In fact, Eros is a tribute not merely to the entangled concepts of romantic love and sexual desire, but to Antonioni himself -- to a love for him and, one suspects, a desire to be like him. In the words of Soderbergh, who reduced his director's statement to a single line: "I wanted my name on a poster with Michelangelo Antonioni."

Both Kar Wai and Soderbergh succeed in invoking the master while retaining stylistic ownership of their work. Their films are smart and engaging, beautiful to watch, with a refinement of perspective and light rarely seen on the contemporary screen. (In brief: They're art.) Antonioni, for his part, has done an excellent job of being himself, maybe even of chuckling at himself. As a single entity, Eros is a strong work, rich with detail and nuance, though perhaps without the philosophical depth that its French producers intended. But who cares? This is a feast for the eyes. And at times, for parts farther south.

Eros opens with Kar Wai's segment, about a tailor (Chang Chen) besotted with desire for an elegant courtesan, played by Gong Li (Chinese Box). The piece is titled "The Hand," but it's also about the shoulder, the neck, the crotch -- and, in a starring role, the torso. In fact, toward the beginning, an entire scene passes between two torsos at sexual odds with each other, one pursuing and the other resisting. We don't see the faces; we only hear the voices. But even the words are superfluous; everything that happens, happens in the hips.

"The Hand" is a gorgeous work of slow and painful longing, saturated in gray, soaking in romantic pathos. Year after year, the tailor toils at his machine, crafting dresses for a woman who wears them to woo others. Meanwhile, as the seasons pass, the courtesan falls into disgrace, losing her apartment, her dresses, and ultimately her health. In a dank hotel, where the failing Miss Hua and the now-successful tailor meet for a final time, Hua seeks belated redemption.

Soderbergh's "Equilibrium," about a neurotic man fussing over a sexual dream, is lighter -- essentially a jest. Its subject is less eros than the worry and contrivance it generates in the average man. Soderbergh liked the idea of casting both Robert Downey Jr. and Alan Arkin -- men not noted for their erotic allure -- in a film about sex, and Arkin is hilarious as a profoundly distracted psychiatrist. Downey is less interesting, and his solipsism feels anachronistic (the film is supposed to take place in 1955), but Arkin sails through, carrying us along. The entire therapy session is in black-and-white, and Soderbergh goes to town with the chiaroscuro; watch for the scene where Downey's head disappears in shadow. Again, torso rules.

There are delights aplenty in Antonioni's "The Dangerous Thread of Things," about a couple whose relationship has tanked. For one, there are naked breasts. At the segment's opening, long-and-lean Cloe (Regina Nemni) sunbathes without a shirt. When her husband, Christopher (Christopher Buchholz), takes her for a drive, she slips on a shirt, but it's transparent. Yes, the generous Antonioni says to us, you can look at her breasts for the entire film. Except not quite: There's another character, the young and exceptionally bouncy Linda (Luisa Ranieri), whose breasts we must also devour at great length. Up to his usual tricks, Antonioni creates stunning visual beauty, languorous shots, and loaded detail.

Uniting all three segments -- and presumably the result of the tribute to Antonioni -- is the art of the unseen. Characters constantly talk to, look at, or overhear someone beyond the frame. In fact, all three stories dwell luxuriously in mystery, milking a kind of sensual dreaminess from our not-knowing, until they reveal what they were meant to reveal.