Thousands of Coors commandos get shitfaced for Toby Keith. 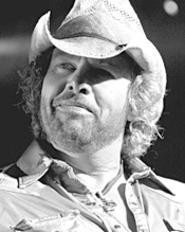 Toby Keith, partying for the red, white, and blue at Blossom.
The tipsy soldier double-fisting beers said it all, without saying a word: This night was about Coors Light and combat fatigues. Toby Keith was in town, and the wobbly commando was getting shitfaced for America at Blossom last Friday night. He was joined by thousands of fellow piss-drunk patriots.

We're not sure what crowd members were prepared to war against, but one thing was clear: They were dressed for battle. Dudes in military garb abounded, along with ladies in red, white, and blue cowboy hats. Chants of "U-S-A! U-S-A!" rose from the lawn, where folks cheered and puked. "I just slipped on some barf," a gal sighed as she hurried through the grass.

Still, it was hard not to feel a little patriotic as Keith took the stage. After all, the Sasquatch-sized "Ford Truck Man" began his show with a loving tribute to product placement, which defines America as much as that star-spangled banner does these days. As the lights went down at the near-capacity venue, the set started with a five-minute Ford commercial. Hell, there was even a full-sized Ford truck jutting out of the back of the stage, not to mention a big Ford sticker plastered onto Keith's guitar. You'd think a guy charging $71 a pop for pavilion seats wouldn't need any corporate largesse -- but then again, it's best not to think too much at a Toby Keith show; it only gets in the way of the fun.

And that's not meant as an insult. Despite his rep as a honky-tonk firebrand, the kind of guy who'll "put a boot in your ass" if you question the purity of Lady Liberty, Keith is much more about partying than politics. While Keith claims to be a Democrat, it's easy to assume the opposite after hearing him pander to the right with hawkish tunes meant to appeal to country music's traditionally conservative fan base. Keith wants to have it both ways: He espouses a liberal lifestyle to lure in the young partiers, and a conservative worldview to appease country music's old guard.

But in concerts -- perhaps unsurprisingly -- it's boozing that takes center stage. With drinking tunes outnumbering nationalistic anthems by a ratio of four to one, Keith comes off like Jimmy Buffett with a redder (and thicker) neck. He sang warbly odes to one-night stands ("I'm Just Talking About Tonight"), drunken infidelity ("Stays in Mexico"), and getting high with country legends ("Weed With Willie"). "All I'm talking about is getting naked and stretchin' out," Keith sang at one point -- and he wasn't stretching the truth. "Where's all the whiskey-girls at?" he asked a few minutes later, and thousands of gals screamed loud enough to drown out the P.A.

Backed by a 10-piece band, Keith's radio-friendly country was brightened by a horn section and a keyboardist, who gave his songs a subtropical lilt at times. He turned crowd favorite "When Country Comes to Town" into a reggae/calypso number, complete with toasts from his dreadlocked trumpeter. Through it all, Keith frequently threw up the devil horns and raised the roof, his big biceps flexed, with fireworks punctuating the end of each song. Four days after the Fourth of July, it felt as if the holiday had never ended.

So when Keith did delve into his more jingoistic material, it felt awkward and forced, like attempting to pledge allegiance while doing a keg stand. The intent of sensationalistic tunes like "The Taliban Song" was to shock, not awe. Keith even seemed to subtly acknowledge as much, referring to his hot-button numbers as "buzz songs" -- as if he sang them to halfheartedly affirm his standing among right-wingers -- before getting back to songs about threesomes and margaritas.

After 90 minutes of drinking tunes (with a couple of exceptions), Keith ended his show with the one-two punch of "American Soldier" and "Courtesy of the Red, White and Blue (The Angry American)." But there really was no need for Keith to reassert his patriotism after an hour and a half of pyro, fiddle solos, and beer bluster. After all, what's more American than excess?