Inside the dirtiest joke ever told is a nugget of pure joy. 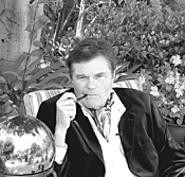 Fred Willard gives the old joke an absurdist spin.
Pity the daily newspaper critic who must review The Aristocrats without using such phrases as "a longshoreman's arm up a little girl's ass," "then my wife goes down on my son while the dog's licking his balls," "my grandmother's covered in my come," and "is it shit before piss, or sucking before fucking?"

Yet sentences such as those above (only a dozen times worse, seriously) fill a good hunk of this 86-minute documentary by Penn Jillette (the tall, talky half of Penn and Teller) and Paul Provenza, about a single joke that's infamous among stand-up comics and was, till now, unknown among the rest of us, who were apparently quite lucky to live in ignorance all these years.

Whatever you have heard about The Aristocrats does not do it justice. It's not, as has often been written, a movie in which 100 comics tell the same joke 100 different ways. Neither is it "an essay film, a work of painstaking and penetrating scholarship," as A.O. Scott wrote in The New York Times recently. It's far more joyous than that, a celebration of the naughty joke and the courage it takes to tell one in the post-Nipplegate era. And The Aristocrats is a simple blast too -- a movie in which comics pull back the curtain and reveal the secrets of their craft.

The joke itself, a sort of secret handshake between those who make their living working the two-drink-minimum crowd, isn't even much of a joke. And its punch line is the title of this movie and nothing more. Its setup is simple: A man walks into a talent agency and pitches his family's act. When the agent asks its name, he is told the act is called "The Aristocrats." It's almost "the opposite of a joke," says one of the nearly 100 comics and actors interviewed for The Aristocrats, because the punch line isn't meant to get the laugh.

The joke dates perhaps to vaudeville, maybe even further. It's more urban legend than anything else, a dirty joke upon which comics cut their teeth while killing time backstage with fellow performers, each trying to one-up the other with sicko shit involving grannies and doggies and babies having things shoved into them. No one tells it the same way: Some comics tell it clean, one does it with an Amish twist ("'Tis well we call ourselves The Aristocrats"), a mime performs it in silence, and a magician tells it using a deck of cards.

Legend has it Chevy Chase used to have parties where attendees were prodded into telling the joke for more than 30 minutes, and rumor is that Bob Saget's version, heard here in horrific bits and ghastly pieces, lasts longer than an hour. (Saget, in fact, gets the biggest laughs in the movie.) And then there is Gilbert Gottfried, who resorted to the joke at a September 29, 2001 Friars Club roast of Hugh Hefner only after his September 11 jokes tanked. As it turned out, the foulest joke ever told turned out to be a curative balm for fresh wounds. It's the tonic that tastes awful, sticks a little too long in your throat, but goes down just swell.