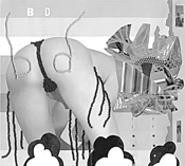 All-out noise projects, like Merzbow, seem designed to send listeners screaming from the room. Dance music, on the other hand, is all about pleasing crowds and getting the party started. But on its latest disc, Black Dice attempt to combine noisiness with rhythm, failing on both counts.

Black Dice's noise isn't noisy enough -- it's just a series of crunching sounds and electronic squiggles/squeals that never lock into a steady groove. There's the same problem with the rhythms: They're nowhere near tight enough to dance to, but they aren't spazzy enough to freak out to, either. What's worse, the haphazardness seems deliberate.

Black Dice, like the equally hyped Wolf Eyes, is overdocumented to a laughable degree. The band members seem to roll tape every time they touch a keyboard. But the results haven't yet been interesting enough to merit release. Broken Ear Record feels like a halfhearted gesture, the sonic equivalent of a bored shrug. Some have suggested the whole indie noise "scene" is about fetishizing the insincere, ironic gesture. Well, even if New York hipsters are dumb enough to fall for that trick (again), the rest of America's rock listeners shouldn't feel compelled to follow them over the cliff.