By Jordan Harper and Robert Wilonsky 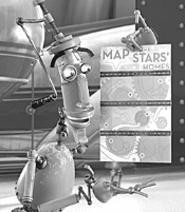 Robots: A wide-screen fantasyland becomes a home-screen playground, and the kids will like it just fine.

Robots (Fox)
The story of a small-town 'bot (voiced by Ewan McGregor) who bolts for the big city, Robots is the first non-Pixar film to compete with that studio's razzle-dazzle. The thing's stunning to look at -- and, frankly, it's better to stare at than listen to, since listening entails putting up with Robin Williams doing Robin Williams. The small screen shrinks its grandeur just a touch; what played like a fantasyland at the cineplex just looks like a playground on TV. Nonetheless, the extras justify the expenditure: There's a train-station tour starring Jennifer Coolidge's big-assed Aunt Fanny, a short test film that's as polished as any final product, three disappointing deleted scenes (only one of which is fully animated), a couple of documentaries, three games (make a robot do the Robot, etc.), and other errata sure to occupy the kiddos once they've watched the feature a dozen times. -- Robert Wilonsky

The Amazing Race: The Complete First Season (CBS DVD)
Those who thought Survivor galling and Big Brother appalling found welcome respite in The Amazing Race when it debuted four years back. It was a nifty variation on reality television -- a travelogue-cum-thriller starring pairs of regular peeps, who had to touch base in Central Park before heading to the waterfalls of South Africa, the coliseums of Tunisia, the sewers of Paris, and the slums of India, landing back in N.Y.C. for a million bucks at the finish line. It worked then and still does; this DVD, with some 90 minutes of unaired footage that's worth a peek, is surprisingly effective, even past its expiration date, thanks largely to a cast of folks who seem constantly on the verge of nervous breakdowns. -- Wilonsky

The Man Who Fell to Earth (Criterion Collection)
Nicolas Roeg's 1976 film was a perfect match for the DVD auteurs at Criterion: It's been gorgeously transferred (with 20 minutes restored) and comes loaded with extras: essays, stills, interviews -- even a copy of the novel. It's the type of film you might want to own more than watch. David Bowie is excellent as an alien who's come to Earth seeking water for his burned-out planet. But he, like the rest of the cast (Buck Henry and Rip Torn, among them), is more an idea than a character. The film rolls on, never boring but never quite engaging. Better to read the novel and enjoy the enthusiastic commentary from Roeg, Bowie, and Henry. Or leave it running on mute at your next party, where it'll look hip and gorgeous. -- Jordan Harper

The Right Spectacle: The Very Best of Elvis Costello -- The Videos (Rhino)
Even with 27 videos and 68 minutes of bonus footage, this is by no means the complete Costello; missing is his famous 1977 Saturday Night Live appearance, during which he dead-stopped "Less Than Zero" and whipped out "Radio Radio" against NBC's wishes. But this is a nifty comp nonetheless, augmented by Costello's own comments, which pop up onscreen like sarcastic, self-deprecating subtitles. He mocks the early videos (most of which were shot in the same white room or South of France locale, after too many drinks) and grows to like the later ones -- especially the poignant promo for "Veronica," the short about his grandmother that won an MTV Video Music Award in 1989. The TV-show stuff, too, is essential -- especially the Steve Nieve duet from the 1981 U.K. show What's In, which hinted at the mellow, contemplative direction Costello's solo career would take. It's so like candy, every sweet bit of it. -- Wilonsky

Family Guy Presents Stewie Griffin: The Untold Story (Fox)
This feature-length movie will be irresistible to fans of the fractured Fox cartoon -- or at least to those who didn't already download it this summer, after a much-publicized leak. The series is as much a sketch-comedy show as a sitcom, making even its most obvious antecedent, The Simpsons, seem staid and linear by comparison. So perhaps it's not surprising that the movie shares many flaws with other sketch-show adaptations: It's flabby and far more dependent on plot than the source show ever was. Even worse: Having power-mad infant Stewie dominate the proceedings is wildly irritating. Of course, the off-color jokes and pop-culture references are damn funny. Among the few extras: an uncensored audio track in which the Griffins drop F-bombs. -- Harper