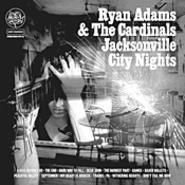 One of the troublemakers at the Smoking Gun needs to publish Ryan Adams' Lost Highway contract. In May, the ultra-prolific singer-songwriter released Cold Roses, a double album cut with the Cardinals, his current backing band; on November 1, he's dropping 29, a solo disc produced by Ethan Johns, the same studio whiz who helmed Adams' 2000 solo debut, Heartbreaker. In between, we have Jacksonville City Nights, another Cardinals disc. For a guy who hasn't exactly won unanimous praise for his work since the dissolution of his old alt-country band Whiskeytown, Adams must have about as sweet a major-label deal as one can get these days.

Like Roses, Jacksonville is long on melancholy, hickory-wind country-rock: The opener, "A Kiss Before I Go" (one of six tunes that run shorter than three minutes), whines with creamy pedal steel as Adams sets off for "a place where nobody cries."

In "Hard Way to Fall" he compares "the rain on the streets" with "the scotch that she drinks." Norah Jones drops in for a casual cameo in "Dear John," challenging Adams for the title of Crooner Most Likely to Take Over a Deserted Piano Bar. Dude's getting plenty of practice.