Weezer's auteur takes a tentative step into the real world. 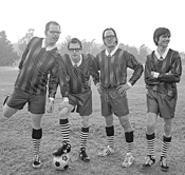 Weezer frontman Rivers Cuomo (second from left), having a ball.
Sure, we could follow the lead of nearly every story ever written about Weezer frontman Rivers Cuomo and spout off about what a weird guy he is. Let's just say that Cuomo has practiced so much self-imposed isolationism (including a well-publicized, two-year diet of celibacy) that you could name a desert island after him.

Witness the man's abandonment of rock and roll. And his band. After Weezer's hooky, power-pop debut in 1994 sold 2.5 million copies, Cuomo took his figurative ball and went home, enrolling at Harvard to try his hand at classical composition. It was but the first of many curious steps the now-35-year-old songwriter would take.

When Rivers emerged from Harvard's hallowed halls in 1996, his group delivered album number two: Pinkerton, a dark, twisted reenvisioning of the 1904 Puccini opera Madame Butterfly about the doomed affair between U.S. naval officer B.F. Pinkerton and a 15-year-old Japanese geisha. (See what an Ivy League education will do for you?)

Weezer fans -- legions of 'em -- have since embraced Pinkerton as the band's Pet Sounds and elevated the disc to its own pedestal in the alt-rock canon. But initially, the record stood as the dictionary definition of sophomore slump. In fact, Pinkerton was such an immediate failure, both commercially and critically, that Rolling Stone named it the second-worst album of '96. Blame it on the concept, blame it on the songwriting, blame it on Cuomo's disaffection -- whichever, the people just weren't buying it.

But Cuomo is singing a different song now.

"I don't have any interest in being an alternative artist or a cult artist or any kind of exclusive, elite, or esoteric type of artist at all," he says of those Pinkerton years. Yes, it seems that with the May release of Make Believe, Weezer's fifth album, the once-hermetic Cuomo is finally ready to walk among the living. For those predisposed to thinking of the man as a sort of carnival freak, this is big news.

"I think one lesson I learned," he continues, on a cell phone backstage at London's Hammersmith Odeon, "is what a strong instinct I have for separating myself from everyone and thinking of myself as different and weird and special. That kept coming up again and again as I was writing songs, writing lyrics that most people couldn't relate to. And then hearing from our producer, Rick Rubin, that I was really just cutting myself off from people who like me and appreciate me, and that wasn't necessarily the smartest move."

For Make Believe, Rubin prodded Cuomo into experimentation with "assignment songs." "For whatever reason, it didn't work with me at all," Cuomo says. "He gave me a lot of different assignments, but none of those songs turned out very good. I think the best songs always have parts in them, or at least a germ in them, that was created emotionally and spontaneously. I've definitely tried it the other way, but the songs just don't feel as important."

Despite protestations to the contrary, the exercises were at least partially successful. A pair of Make Believe's dozen cuts, including the first single, came from homework doled out by Rubin. "One [assignment] was 'Write a song like Billy Joel,'" Cuomo says. "That turned into 'Haunt You Every Day,' which I think is really great. The big one, though, was 'Write a song with the "We Will Rock You" beat.' I realized, as I was writing the song 'Beverly Hills,' that I could use that beat, and indeed it turned out really good."

Also at Rubin's prompt, Cuomo dove into the deep currents of meditation. Despite the rigors of fronting a world-touring band, he hasn't missed a day since he started in May 2003. Which means that, like a nervous narcoleptic, meditation can happen anywhere at any time.

And what have these very personal, emotional exercises yielded for Rivers Cuomo, the artist? "Beverly Hills" and the album's second single, "We Are All on Drugs," smack of the sardonicism that pushed his band to the alt-rock forefront more than a decade ago. But "Perfect Situation," a song drummer Pat Wilson describes as "classic Weezer," rings as unaffectedly honest as anything the band has recorded in years. Yet once again, Cuomo adopts the all-too-familiar role of unaccomplished suitor.

"'Perfect Situation' is the oldest song on the album," he says. "We'd just finished touring, and I'd come back to L.A., and I was going out a lot. And I went out to a bar one night, and there was a really pretty girl who sat down next to me, and we were kind of talking. We were in this group of people, and occasionally we would end up talking to each other, but I couldn't make it happen. It wasn't that she was giving me a negative vibe at all. Just something within me was stopping me from connecting with her, even though I was really attracted to her. And that's something that's happened so much in my life. And I just got so frustrated and angry with myself, I went home."

In his fabled L.A. apartment with blackened windows, no car, and no phone, the sequestered songwriter drank a beer, turned on his tape recorder, and "very quickly" sang out words to capture his lack of fulfillment.

So despite continued critical and commercial success, hours of meditation, and a professed desire to reach out and join, you know, the real world, it's hard to say if anything has really changed.

"Like I said, that's the oldest song on the album," Cuomo insists. "I think I'm in a much more happy and healthy space."