Fellowship of The Ringer

Johnny Knoxville's still an ass, but his co-stars are something special. 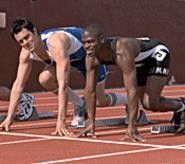 Steve (Johnny Knoxville) gets ready to compete against Jimmy the superstar (real-life Special Olympics champ Leonard Flowers).
It's impossible to talk about The Ringer, a comedy about someone pretending to be retarded in order to rig the Special Olympics, without mentioning that episode of South Park in which Cartman does the same thing. The Ringer was already in production when that episode was made; it has taken its sweet time coming out, possibly to give audiences time to forget. It's produced by the Farrelly brothers, who used to make fun of handicaps (in There's Something About Mary), but more recently have gone soft on the subject (as in Stuck on You and Shallow Hal). By contrast, Trey Parker and Matt Stone, who were once slated to make a prequel for the Farrellys' Dumb and Dumber, hold nothing sacred and feel no Hollywood obligation to make Eric Cartman sympathetic in the least. Cartman's a lot funnier than Johnny Knoxville, anyway.

But once you see the movie, the comparisons disappear. There have been numerous movies about the regular Olympics; surely the world can handle more than one story about the Special ones. The Farrellys didn't write or direct, which is probably for the better; the screenplay is by Ricky Blitt (TV's Family Guy and Politically Incorrect), and the director is Barry W. Blaustein, a comedy writer who is also very familiar with athletic events featuring freakish performers who don't always get the respect they deserve -- his last movie was the pro wrestling documentary Beyond the Mat. Fellow WWE fans should watch and listen for cameos by Terry Funk and the voice of Jesse Ventura.

Knoxville plays Steve, a lower-level office drone so desperate to improve his lot in life that he walks into his boss' office and demands a promotion. He gets it, but only if he'll agree to fire the loyal and lovable janitor, Stavi (Luis Avalos), because, as the boss explains it, "I caught him using my personal bathroom -- I sat in his pee!" Steve's too good-hearted to do it, but he needs the promotion, so he persuades Stavi to come work for him instead, as a personal gardener. Stavi doesn't fare so well in that position, and a nasty lawnmower accident ensues, necessitating expensive surgery. Hoping to call in a favor from his uncle Gary (Brian Cox), a compulsive gambler, Steve finds that Gary is woefully in debt to a loan shark, who has a soft spot for the Special Olympics -- especially the reigning champion, Jimmy (real-life Special Olympics champion Leonard Flowers), "the Deion Sanders of retards." So Gary ropes Steve into a plan that'll pay both their debts -- bet against Jimmy and have Steve, a former amateur track champion, enter the contest pretending to be mentally handicapped.

Steve enters under the pseudonym "Jeffy Dahmor" and uses his talents as a failed actor to convince the organizers that he is indeed challenged (coulda just shown them some episodes of Jackass, really). But his fellow athletes quickly see through the ruse, and while initially hostile, they decide to help him win, because they all hate Jimmy, who gets driven around in a limo with the license plate "Speshl J" and has Nation of Islam bodyguards to fend off fans. Complications ensue when Steve-as-Jeffy falls for a non-special (but especially beautiful) volunteer (Katherine Heigl) with a boorish boyfriend (Zen Gesner, who's been in every Farrelly brothers movie to date).

Knoxville isn't a great leading man. He seems to have been chosen for his ability to fall down and get hit with stuff, but his pretense at being handicapped isn't all that convincing or funny. By contrast, the actors and athletes who play his Olympian friends are hilarious, and most viewers would be surprised to find out which ones are "challenged" in real life and which are not. Jed Rees, who played a none-too-bright alien in Galaxy Quest, gives one of the year's best comedic performances as Glen, a competitor obsessed with hugging and making childish jokes about his fingers. Newcomer Edward Barbanell, who plays Steve's roommate, nicely skewers all those clichés of handicapped nobility and inspiration by being a smartass who never seems to let go of a grudge. Bill Chott, Leonard Earl Howze, Geoffrey Arend, and John Taylor round out the main cast, and all are scene-stealers.

As much as The Ringer appears to follow the formula of a sports movie, it's at least as much a parody of such earnest Oscar-bait films as I Am Sam and Mifune. Put one mentally challenged person in a movie (or beloved actor playing same), and the temptation tends to be to make him or her into a messianic innocent. But populate a movie almost entirely with such people, and they actually get to have personalities. These guys are laugh-out-loud funny, not because they're being belittled, but because they're finally getting a chance to show a sense of humor onscreen.