A Good Woman would benefit from a good actor or two. 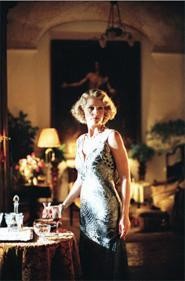 Helen Hunt plays a middle-aged gold digger who chases her prey to Italy.
A Good Woman, Mike Barker's adaptation of the Oscar Wilde play Lady Windermere's Fan, has been gathering dust for some time. It played the Toronto Film Festival in the fall of 2004 before opening in 2005 in every country in the world except this one. Such dawdling doesn't bode well for its contents, which bear the musty, dusty scent of passed-over product; if this thing were at all good, surely it would have played Cleveland before Capetown. And perhaps it would not have opened at all were it not for the appearance of Scarlett Johansson; surely, her unfathomable high marks for Match Point warrant this look-see at long last. So here it is, then -- Wilde, wrought ever so tame.

Barker, a maker of second-rate movies pretending to be highfalutin (Best Laid Plans, indeed) and writer Howard Himelstein, who apparently has read all of Wilde and pulled his favorite bits for this one outing, have made something perfectly respectable, but something also perfectly . . . blah. It lies there on the screen, splendid to look at and pleasant to listen to, with its smart-ass chitchat ("Marital bliss is a great burden to place on two people"), but never does it grab you by the collar and blow in your ear and kiss you on the mouth and slap you on the cheek and ask forgiveness before doing it all over again. It's just as happy to shake your hand and go off on its merry way; it's so polite, it's almost rude. Maybe that's why, for some of us, Wilde doesn't hold up as well as, say, Evelyn Waugh, whose Vile Bodies provided the template for Stephen Fry's wowee-zowee Bright Young Things in 2003, which was (like Barker and Himelstein's updating) set around 1930 and had a good time acting naughty. This Good Woman could use a little of that bad.

The story, now updated to the 20th century, moved to Italy, and rife with Americans, burbles with classic soap suds: In Manhattan, a woman named Mrs. Erlynne (Helen Hunt) has slept with so many married men that she's apparently run out of warm bodies and warm wallets. Chased out of the city by winks and whispers, she spies in an issue of Town & Country the photo of a young married couple named Meg and Robert Windermere (Scarlett Johansson and Mark Umbers), who are living for the moment in the splendor of Amalfi; surely, she figures, the Wall Street banker has plenty of money to spend on such a rare thing as she.

Sure enough, within but a few minutes of screen time, Mrs. Erlynne is having hush-hush encounters with Robert, which are a secret to no one. The entire population of Amalfi (mostly displaced Brits with as much time on their hands as they have money in their pockets) witnesses their comings and goings -- save, of course, for Meg. Mrs. Erlynne, naturally, is up to more than taking cash from Robert's estimable stash. Theirs is a complicated relationship -- precisely how complicated, the screenplay makes clear to those paying the slightest bit of attention. Which is to say, not necessarily anyone.

The real fault with this movie lies less with the clunky screenplay from Himelstein than with the acting, of which there is very little of note, despite the estimable talents of Tom Wilkinson as the thrice-married Tuppy, who would make a good woman of Mrs. Erlynne, and Bright Young Thing Stephen Campbell Moore as the never-married Lord Darlington, who would seek to make a veddy bad woman of Johansson's dull thud. (It is painfully ironic that a movie bearing this particular title would have its best performances delivered by men.)

Hunt, who has been little seen in recent years on screens big or small, doesn't much make us miss her. She's never exactly been a dynamic performer, but as a seductress, she's positively miscast here. As Mrs. Erlynne, she offers the hot-to-trot temptations of a dowdy schoolmarm unleashed on the rec room of an old folks' home. And Johansson, as the young American cavorting with Brits amid Italian splendor in the 1930s, floats adrift in the company of better actors. As in Woody Allen's inexplicably adored Match Point, Johansson seems to be reading her lines off smudged cue cards, her enormous eyes filled with the terror of someone about to be discovered she's in way over her pretty head. Here, perhaps, that's a result of having to fill her mouth with Wilde's spicy dialogue; she looks all but ready to break into a sweat. Wish we could say the same.