By the Ayatollah of Rock 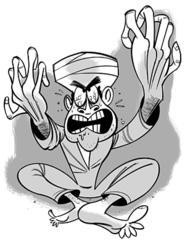 Mike Gorman
All hail R.E.M.! It was the jingle-jangle morning of indie rock, and its latest albums are . . . not bad for a bunch of old farts. Because of all the great tunes, we have held our tongue concerning goofy frontman Michael Stipe. But no longer. For releasing yet another of these tiresome charity songs, this one for the victims of Hurricane Katrina, Stipe has earned himself a fatwa!

Stipe's rendition of the Joseph Arthur-penned "In the Sun" is bland and -- worse -- mopey; frankly, Stipe, the victims of Katrina couldn't give two shits about your two-bit malaise. Sad-sack white folk know what you mean when you sing "Everybody Hurts." A person who found his mother's corpse by the smell of it in the wreckage of her home might tell you to sit down and cheer up. Have a Coke and a smile, Stipe (along with your celebrity guests such as Chris Martin and will.i.am. Next time, think about quietly donating the proceeds of a hit single instead of releasing a self-indulgent public wankfest.

Fatwa! May "In the Sun" be the sunset of the charity song. May artists learn to do good works to get good feelings. It is written.