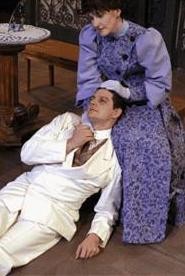 Beck Center presents Mrs. Warrens Profession, with Bernadette Clemens and Nicholas Koesters, through April.
The Dark Lady of the Sonnets -- It's exhilarating to find a short show that's entirely diverting and worthwhile -- not to mention free. The title of this George Bernard Shaw piece refers to the 24 sonnets by William Shakespeare purportedly addressed to a "dark lady," who served as the bard's muse for a spell. Although her identity was never revealed, speculation has it that she was Mary Fitton, the maid of honor to Queen Elizabeth. So Shaw has placed Will on the terrace of the palace at Whitehall, eager to meet his dark lady and feed his urges. Since Shaw was of the opinion that Shakespeare was just a "snapper-up" of overheard talk, he portrays him as a shallow writer, an insulting cad and sycophant -- and David Hansen delivers the part with irrepressible zest. The show's rich language, sly humor, and pitch-perfect performances (including Michael Regnier as a frank and funny palace guard) make this a half-hour that keeps you laughing and thinking. Presented by the Great Lakes Theater Festival through May 7 at various locations; for more information, go to www.greatlakestheater.org. -- Christine Howey

The conventional image we have of playwrights and poets is of lonely souls slaving away in a poorly lit basement. Well, you've got the location and the illumination right, but everything else about the Dark Room project is much cheerier. Sponsored by the Cleveland Theater Collective, it's a once-a-month workshop/cabaret for writers who want to try out their new efforts on a small but extremely encouraging audience. On this night, in a basement room in the Parish Hall at Cleveland Public Theatre, the quality of the pieces varied widely, as is to be expected with scenes or verses that are still being developed (thus, the dark room). But one monologue by Tom Huggins, describing the burnout of nurses dealing with psycho patients in hospitals, was as irreverent and hilarious as a David Sedaris essay. Other offerings, each under 10 minutes, touched on the obnoxious questions asked of "little people," a musical take on holiday haters, and a little girl's imaginary friend, who is a middle-aged Dame Edna type. Reading from scripts (and dragooning anyone nearby to fill out a cast), the writers express, share, and support. And that's a terrific environment for any embryonic artistic endeavor. Takes place the second Thursday of every month at Cleveland Public Theatre's Parish Hall, 6205 Detroit Ave., 216-631-2727, www.clevelandtheater.com. -- Howey Dream a Little Dream -- Papa Denny Doherty wrote this piece, and he's also the narrator, lead singer, and star of this "nearly true" story of the Mamas and the Papas. The group that brought him fame, riches, and drugs was a smoothly blended quartet, but that element is missing here; Doherty reduces his former compadres to backup status, crooning softly in the shadows as he stands across the stage in his own spotlight. With wry irony and deflecting shrugs, he traces the chronology of his career, from struggling folksinger from Halifax to his palace in Beverly Hills, where he submerged himself in gallons of top-shelf bourbon and drugs. Part of the problem is that Denny's voice can't sustain the pristine tenor that was his mark of distinction four decades ago. He can't be blamed for the ravages of time and Crown Royal, but he is responsible for focusing all the attention on himself instead of making John Phillips, Michelle Phillips, and Cass Elliot into real people. Director Randal Myler, who wrote and directed the magnificent theatrical bio of Janis Joplin, Love, Janis, certainly knows better than to allow one sporadically interesting fellow to dominate the stage for more than two hours. But Myler is hamstrung by this amateur playwright's clumsy and self-centered tribute to his own storytelling skills. Through April 29 at the Cleveland Play House, 8500 Euclid Ave., 216-795-7000. -- Howey

Midnight Martini Show -- There is a strange attraction in Frank Sinatra's loosely organized Rat Pack and their infamous, loopily disorganized Las Vegas shows that ran for a few golden years back in the 1960s. Frank, Dean Martin, and Sammy Davis Jr. mixed pop songs, corny jokes, and Johnnie Walker into an irreverent, hip evening that seemed so easy. What the Midnight Martini Show at Pickwick & Frolic proves is that it ain't easy at all. This one-hour set attempts to capture the bored-with-it-all sophistication and the slightly inebriated intimacy that the Rat Packers achieved, but it fails on several counts, from the overly eager performers to the florid songs and lame drinking jokes. Which is not to say that this no-cover show doesn't provide a convenient glide path for those downtown on a Friday or Saturday night. Indeed, some of the American standards are sung well enough. Now the task is to find directors and performers who understand that being casually funny while delivering classic tunes takes a lot of work. Fridays and Saturdays at Pickwick & Frolic, 2035 East 4th St., 216-241-7425. -- Howey

Mrs. Warren¹s Profession -- One of the small, dark fears that occurs to anyone who has brought a child into the world is this: What if we can't stand each other when she's all grown up? This kind of parent-child dysfunction is at the heart of George Bernard Shaw's play, which was written more than a century ago, but still packs topical punch in its exploration of the economic upside of prostitution and the independence of women in a patriarchal society. Mrs. Kitty Warren (Dorothy Silver), a feisty lady decked out in flashy 1902 duds, has returned from her far-flung business trips to meet up with her grown daughter, Vivie (Bernadette Clemens), a somber and serious student who has been raised in the sheltered environment of private schools. It's a far cry from the world of her mother, who operates a string of cathouses across Europe. These discrepancies are just the first chinks in this engrossing relationship, which Shaw allows to evolve over the four days the play encompasses. A strong and polished Beck Center cast drives the action forward and fashions a stimulating experience. Through April 30 at Beck Center, 17801 Detroit Ave., Lakewood, 216-521-2540. -- Howey

Seven Brides for Seven Brothers -- According to Plutarch's telling of the mythological rape of the Sabine women, ancient Rome was losing population and females were in short supply, so some horny soldiers glanced over at the hotties down the road and figured, hey, let's go get us some of that. This mass felony is also the central theme of Seven Brides for Seven Brothers, the theatrical interpretation of the 1954 film. This iteration tries to capture some of the electric Michael Kidd choreography that made the movie so watchable. But despite consistently strong singing voices and a load of earnest effort, the production is sunk by leaden pacing and uninspired dancing, along with tunes and dialogue that rarely elevate above the mundane. There are so many dead ends in this work that it might more accurately be named Seven Weddings and a Funeral. Through April 29 at Carousel Dinner Theatre, 1275 E. Waterloo Rd., Akron, 800-362-4100. -- Howey