Build Your Own Band

We try our hand at musical matchmaking. 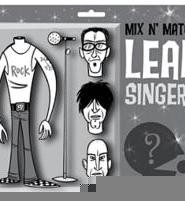 Mike Gorman
What's in a lead singer? Audioslave and Velvet Revolver have gotten along quite nicely without their prima donna leaders. In honor of original Rock Star Tim "Ripper" Owens (featured in this week's music section) and new INXS singer J.D. Fortune (the man who lifted the tattered hopes of Elvis impersonators everywhere), we offer our thoughts on how to save the following unfortunate sidemen the indignity of appearing on Rock Star III.

Soundgarden meets Mike Patton.
Led by guitarist Kim Thayil and histrionic wailer Chris Cornell, the Seattle quartet blew up and burned out too quick, calling it quits in '97. With Cornell busy in Audioslave, how about reuniting the group behind one of rock's most versatile and underrated singers, Mike Patton (Faith No More, Mr. Bungle)? Patton's experimental edge and producing skills could have come in handy during Down on the Upside. (It'd be fitting, since Cornell was originally invited to sing for Mr. Bungle.)

Dead Kennedys meet Lee Ving.
It's getting hard to keep track of who's heading the DKs; they've gone through at least three replacements since reuniting without their bellicose singer-songwriter Jello Biafra. Lee Ving, the sometime actor and lead singer for L.A. punk group Fear, brings both the classic punk pedigree and the kind of obnoxious, in-your-face attitude Biafra's known for. (Witness his crowd-baiting in Decline of Western Civilization.) Ving's songwriting skills are well displayed on such classics as "Let's Have a War" and "New York's Alright if You Like Saxophones."

The Misfits meet Henry Rollins.
There's little in it for Rollins, who's made quite a career out of being himself -- an archetypal, testosteroid angry man. Other than his greater size, he's the perfect replacement for Glenn Danzig. Perhaps in uniting, he and the group might regain a shred of credibility -- besides, could you imagine an evening of old Misfits and Black Flag tunes?