After years of hardship, the Drive-By Truckers press on. 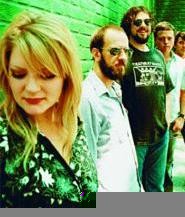 While this evening is antithetical to the band's standard alcohol-soaked all-nighters, singer-guitarist Patterson Hood is quite satisfied to be opening for the Black Crowes. The last five years have redeemed a decade and a half of struggle.

Since the 2001 release of its third album, Southern Rock Opera, the quintet has survived personnel changes, hard times, and divorce. The reward was the near-universal acclaim that has greeted their last four albums.

The Truckers have earned accolades for their ability to blend balls-out indie guitar rock and rootsy, alt-country twang. Their richly detailed portraits and pissed-off rants thrive on a bare-bones frankness that reflects the band's southern upbringing and a dark, world-weary wisdom.

From the haunting "The Deeper In," with its true-life tale of incest and judicial retribution, to "Gravity's Gone," which concludes, "I've been falling so long, it's like gravity's gone, and I'm just floating," the Truckers write about people staring at the bottom of the drink -- or the barrel.

"Nothing would make me happier than to make an album of really happy songs, if I could figure out a way to do it and have it not suck," says Hood (pictured, center).

Hood's father, David, a noted session bassist and member of the Muscle Shoals Rhythm Section, has recorded with everyone from Rod Stewart to Aretha Franklin. David did everything he could to discourage his son from taking up the musician's hard life, but his advice was drowned out by the revelatory force of the Replacements.

"I reviewed Tim for my college paper and pretty much ended the review by going, 'What the fuck am I doing? And why am I here reviewing this record, when I should be doing this record?'" Hood says.

Hood and his college roommate, Mike Cooley, dropped out of school and started a band called Adam's Housecat. For six years, every dime and ounce of sweat went into the project. They even had some critical success, winning Musician's Best Unsigned Band Contest. But it all fell apart.

"At the end of the day, we had nothing to show for it but a finished record that never came out," Hood says. "A lot of our ideology -- to this day -- within the band and how it operates was born of that not working and attempting to get it right the second time."

Between Adam's Housecat and reuniting with Cooley to form Drive-By Truckers in 1998, Hood endured plenty of soul-searching. "The five years in between that band and this band were probably the worst years of my life," he says.

That period is epitomized in the new song "A World of Hurt," in which Hood sings, "I was 27 when I realized blowing my brains out wasn't the answer. So I decided maybe I should find a way to make this world work out for me."

Soon after forming, the Truckers released a pair of studio albums (Gangstabilly and Pizza Deliverance) and a scorching live set (Alabama Ass Whuppin'). They then embarked on their magnum opus, Southern Rock Opera, an ambitious double album that married a young man's coming of age with the tale of Lynyrd Skynyrd's rise and engine-stalled fall.

The album bankrupted the group and exhausted the bandmates' patience, nearly breaking them up. But Southern Rock Opera caught the ear of critics. Major-label imprint Lost Highway signed the group in 2002 and rereleased the album to a wider audience.

But Hood's marriage was a casualty of the hard-won success. The songs he wrote in the months after the divorce contribute to the bleak tone of the sprawling follow-up, Decoration Day. The label had no clue how to sell it.

"They were really hoping that we would follow-up with something that sounds like the second disc of Southern Rock Opera, only more concise and upbeat," Hood says.

Lost Highway cut the Truckers loose, but allowed them to take the record. Within a few months, they had signed with New West Records, and Decoration Day could be found atop many critics' year-end lists. Their follow-up, 2004's Dirty South, was greeted with similar praise.

On the band's latest album, Blessing and a Curse, the Truckers diversify their sound, easing back on the rock throttle for the album's second half. Better times aren't holding back the writing process, judging by Hood's "A World of Hurt" and Cooley's "Gravity's Gone," which are among the best songs either has written.

All the miles and hours and shows have paid off what is usually a loser's bet. Cooley, Hood, and company are the cream that rose above the clots that sank, and they have themselves to thank. But now that Hood's a father, what if his kid wants to be a musician?

"No one wants heartbreak for their kid. At the same time, you can't really protect your kid from life either," says Hood. "I worked for . . . an independent pharmacist who was very militant about it. And in the end, the big corporations crushed him . . . How's that really different from the daily disappointments that come from my -- or any other -- job?"