The Ditty Bops rely on charm and old-fashioned locomotion. 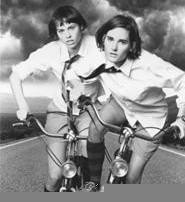 Touring by bike keeps the Ditty Bops sane.
The Ditty Bops love the open road, so they've turned their current tour into an unplugged version of Easy Rider. The duo arrives in Cleveland as part of a cross-country bicycle tour, an approach to travel appropriate to the group's vaudevillian stage shows and anachronistic songs.

From swerving motorists shouting "Get a car, bitch!" to feral bobcats and slavering dogs, the Bops have weathered the worst that America's roadsides have to offer. Traveling at separate speeds (with walkie-talkies for emergency communication) not only sculpts the bandmates' calves; it eliminates intraband squabbling.

"It's important for people to have their personal space on the road, and that isn't really possible in a van," says singer-mandolin player Amanda Barrett. "Alone time helps us avoid a million arguments."

And it's certainly a lot harder to argue when you're physically exhausted.

Barrett arrives at her hotel room in Boonville, Missouri, at noon, minutes before this phone interview, after a trek from Kansas City that began at 7 a.m. Though she went to sleep at 7 p.m. the previous evening, she admits to "cumulative fatigue."

Between bites of a "salad on bread" that she grabbed from Subway -- the first time on the tour she's been forced to settle for chain-store food -- she speaks in a weary tone that stands in stark contrast to her perky singing style. Abby DeWald, Barrett's partner romantically as well as musically, murmurs in agreement with Barrett's early answers, then disappears, probably crashing on a nearby mattress.

Barrett and DeWald met in Los Angeles (the band's home base) in 2000, bumped into each other at a Rocky Horror Picture Show screening in New York three months later, then reconnected in California. They started dating and writing songs together, though they didn't become a gigging group until a serendipitous trip to the home of Marty, an elderly neighbor, while searching for their lost cat.

They never found it, but they spotted several guitars in Marty's living room and proposed a jam session. When they returned two weeks later, strumming self-penned tunes and synchronizing their vocals, Marty told them, "You can't stop doing that."

The Ditty Bops released their self-titled debut disc in 2004, opening the album with the prophetic track "Walk or Ride." ("They say we won't make it far/If we don't drive there in a car/But we'll be there with time to spare.")

Barrett and DeWald's music ranges from western swing to hot jazz, intertwining styles in innovative fashion. In May, the follow-up Moon Over the Freeway arrived, with a cover of "Bye Bye Love," featuring the duo harmonizing as entrancingly as the Everly Brothers. (However, Phil and Don never supplemented their hooks with surreal carnival instrumentation or the risqué costumes the Bops model in their "Bicycle Bikini" calendar.)

Their records reveal an emotional spectrum that their concerts seldom explore. The proud declaration "There's a Girl" ("She's a friend at least I tell you so/But it might surprise you to find/There's something going on behind the door") marks the only time the two refer to their relationship in a lyric (though DeWald told The Advocate that "everything we wrote is a love song to each other").

But onstage, there's no winking acknowledgment of their chemistry, no Mighty Wind-style kiss to punctuate poignant ballads. In fact, tracks such as Moon Over the Freeway's "Fall Awake" won't necessarily make the set list, which leans toward their giddier tunes.

"I don't think we're upbeat and fun all the time," Barrett says. "But melancholy material isn't always going to work at the clubs, where the crowds can be too rowdy for slow songs. I like playing in theaters, because they're more conducive to variety shows."

Barrett actually comes from a variety-show background. Her father worked as a clown during her childhood and taught her to juggle (age 6) and breathe fire (age 16). Her mother provided her musical entrée, teaching her the dulcimer when she was 13 and inviting her to sing in her harmony group. Tall, lithe, and shorthaired, Barrett (pictured left) -- who resembles Double Dragon-era Alyssa Milano -- left for London at age 17, where she worked for several years as a runway model.

DeWald, tiny and tomboyish, plays the sidekick during the Bops' stage shows. At a recent Wizard of Oz-themed performance in Kansas City, she depicted a pigtailed Dorothy, while Barrett transformed herself with a mid-set costume change from a glowing Glinda into a naughty black-clad broom-rider.

While playing "Your Head's Too Big," Freeway's deceptively charming final track, Barrett pulled props from a briefcase, using a cartoonish sword to puncture a smiley-faced balloon. She inhaled helium, turning her delivery from chipper to chipmunk, then offered to rub the inflated surrogate noggin against her bandmate's head. DeWald demurred, citing "balloon-phobia."

They improvise banter each evening and cycle in new props, giving some away to fans, who participate in such interactive segments as a dance-off to "Sister Kate" or some "Wishful Thinking" karaoke. After all, there's only so much they can stuff into their handlebar baskets. (Pianist Greg Rutledge lugs the group's gear in a van, but there's not much room for auxiliary items alongside instruments, merchandise, and a dragon-emblazoned backdrop the Bops built on the road in a succession of fans' garages.)

The Ditty Bops draw one of the most diverse crowds, in terms of age, of any act on the club circuit. Middle-aged listeners seem the norm, with 8-to-12-year-olds also showing up in force. The Ditty Bops' preference for all-ages venues and their early start times ("When you're riding at 5 a.m. the next day, the earlier, the better," Barrett says) helps cultivate both groups.

Appearances aside, the group isn't exactly Kidz Bops. While the two shroud their saucy tunes in euphemisms ("I'm not a carpenter/But I will nail your ass"), Barrett and DeWald expose their uncensored side in their online comic Rumble Strips. In one panel, Barrett croons, "On the Sunny Side of the Street," while passing motorists call her a "fucking idiot." Another obliquely addresses the prospect of Barrett receiving oral sex from Heidi Klum.

Balancing raciness and innocence with a subtle flair that Britney Spears never quite mastered, the Ditty Bops can simultaneously provide wholesome entertainment for youngsters while making their chaperons feel a bit frisky.