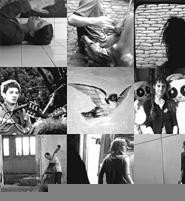 Silver Mt. Zion's picture is like its music: An experimental montage.
As frontmen of major American rock bands go, Wilco's Jeff Tweedy is an unlikely guy. A polyglot descendant of international experimental and American folk, punk, and country music, Tweedy can't really sing. His voice cracks, warbles, and shakes, sometimes missing the key by a mark. Yet opening a recent show with an unreleased Wilco song, "What Light?", Tweedy expresses an essential truth: "Just sing what you feel like singing/Don't let anyone say it's wrong."

The best vocalists keep this in mind. Their pipes don't need to meet the requirements for vocal pedagogy at Juilliard, because good messengers carry an unwavering allegiance to the sound and direction of their voices. They believe in what they sing and that they're meant to sing it.

Many of the best singers can't hold a tune. Woody Guthrie shaped a big chunk of American music with a nasal bleat, and Bob Dylan did the same, often sounding as if he were fighting for air. Patti Smith sounded like such an irreconcilable force because her voice didn't conform, and Lou Reed is a terrible vocalist by any classical criteria. These days, writers like the Mountain Goats' John Darnielle and the Hold Steady's Craig Finn sing some of music's best new songs, but both openly admit they don't sing very well.

In this post-everything decade, criticizing a musician for not being able to sing is like criticizing Jackson Pollock for not being more shapes-oriented. That's just not the point. The point, rather, is form-to-function expression: getting the words out the way one means them, not the way the outside world perceives as most pleasing.

Perhaps that's why it was so surprising when critics came down on Efrim Menuck -- Godspeed You! Black Emperor guitarist and a Silver Mt. Zion co-founder -- for Horses in the Sky, the fifth Silver Mt. release and the first on which Menuck carries lead vocal duties for each track.

Writing for indie mouthpiece Pitchfork Media, Matthew Murphy lamented, "This album is weighted heavily with Menuck's quavering, strident vocals; a fact some listeners might reasonably regard as an obstacle." Another online 'zine, Delusions of Adequacy, wrote that "yelps and off-key vocals . . . grate and stain the whole work." In an otherwise complimentary review at the Pop Matters website, Stefan Braidwood warned, "There are moments when his anguish rips through his voice as though it were a shank twisting violently in his chest. Those to whom Connor Oberst sounds overwrought will not find safe harbour here."

Of all the albums released this decade, Silver Mt.'s Horses should stand as a touchstone of liberation -- a rigorous attempt, with instruments and voices unhinged, to shake off the political and social nightmares that have hounded the world since September 11, 2001. Menuck doesn't try to sing the songs as much as he flings them. "They put angels in the electric chair/Straight-up angels in the electric chair/And no one knew or no one cared/But burning stars lit up their hair," he sings for the album's first minute, artless, nasal, off-key, and earnest.

He can barely breathe during a tirade about gin-drunk senators in diapers, and he sounds like a defeated mourner at the pyre of peace as he wallows in the stanza, "Imagine the view from a helicopter gunship/A man comes into view and you hit a switch/And you cut that man in two." It's about emotional release, not musical rectitude.

Menuck toured America with Godspeed just after September 11. "It was weird, because we did that tour and everyone seemed in denial, and I would try to talk to people about what was happening to their country," says Quebec's Menuck, who has never shied away from incorporating progressive politics into his bands' music. "But people didn't want to talk about it."

Touring with Godspeed days before the invasion of Iraq in March of '03, Menuck received a different reaction from stateside crowds. "Right before the war, people were freaking out and upset that this was going to happen. Everybody was really busy announcing that this was not their President, that they didn't vote for him."

On that tour, Menuck and his Godspeed bandmates were detained and questioned by the FBI, after a gas-station attendant in Oklahoma suspected them of being terrorists. It didn't help that days before, a spontaneous antiwar protest had erupted after their set in Chapel Hill, North Carolina. Menuck says that a report about that incident had been filed with the FBI.

"The FBI shows up, and the first thing this one guy said when he got out of his car was, 'How was Chapel Hill, boys?' It was kind of like, 'Yeah, we're onto you. Be very afraid,'" says Menuck.

So when Menuck sings, "And your doe-eyed policemen demanding more guns," it's informed by experience. Some would argue that it's bad singing. And they'd be right: Menuck can't sing, and he knows it. As he began to sing more with Silver Mt., he often admitted to feeling foolish, coming across as the band's focus, though he saw his voice as just one of many instruments.

Across five records, the band's name has always been a variation on Silver Mt. Zion, emphasizing the band's communal approach by incorporating the words "choir" or "orchestra." As such, Menuck's voice comes bolstered by a mass of strings, guitars, drums, pianos, and the able bed of his friends' collective voice.