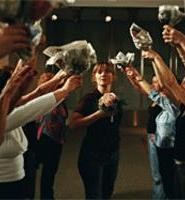 Confetti shreds the wedding industry and reality TV.
Despite its title, Confetti, a chaotic mockumentary in the finest tradition of English vulgarity, has nothing whatever to say about marriage. It's a loud belch in the face of a billion-dollar wedding industry that has sprung up to service the longings of the post-feminist young for ceremonial opulence. Broad as an oak beam and blithely treading on every politically correct toe in sight, Confetti is too tied to situation comedy to function as satire. Which works to its advantage, for the movie manages to slag off beautifully on the honchos of reality television without patronizing either the form or the multitudes hungry for fame and fortune, who queue up for their 15 minutes.

The movie's fertile subject is themed marriage ceremonies, and the conceit is a contest -- carelessly hatched over a liquid lunch by the publishers of a glossy wedding magazine -- between three engaged couples to come up with the best gimmick for their nuptials, with the winner scoring a million-dollar mansion in which to enter connubial bliss. A couple of giddy wedding planners (played in a key of buoyant poofterism by Vincent Franklin and Jason Watkins) will help them realize their dreams of getting spliced, respectively, while playing tennis, while stark naked, and while dancing a Busby Berkeley spectacular.

That all three couples are utterly inept in their chosen fields of performance goes without saying. But as preparations for the competition videos get underway, the couples' lack of talent or finesse pales before the annoyances of meddlesome friends and family, prominent among them a terrific Alison Steadman, former wife and collaborator of Mike Leigh, as an interfering mum with a basilisk stare guaranteed to freeze the balls off the hapless planners.

Indeed, Confetti, cobbled together by a pack of ad-libbing British comedians, plays like an anarchic parody of Mike Leigh's increasingly ossified and earnest method of workshopping and improvisation. In lesser hands, this could rapidly decline into summer-camp burlesque -- as it's sort of meant to -- but director Debbie Isitt handily exploits the radical promise of live reality programming to subvert the aims of its managers by running exuberantly out of control. The rollicking and ineffably sweet final wedding sequences offer a rambunctious poke in the eye at television's mania for tight control, its congenital antipathy to dead space or spontaneity. Isitt herself seems to have almost limitless tolerance for the unscripted -- her large professional ensemble is sprinkled with real-life figures, including a Spanish tennis coach named "Hey-Soos," who was brought in to coach the actors and stayed to mediate their characters' endless bickering.

As always, the ever so humble come out tops, yet Confetti comes not to emulate, but to rescue us from the seemingly endless stream of cookie-cutter British comedies -- the lazy-minded spawn of The Full Monty -- about workers moving on up through soccer, song and dance, or flashing their tits for a good cause. And if nothing else, this affectionately off-the-wall confection offers exuberant confirmation of every suspicion you might ever have had that the English are charmingly eccentric. They're barking mad.