Hawthorne Heights faces the mother of all label fights. 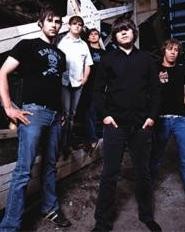 But suing your label is like declaring war: You'd better be prepared for casualties.

In August, Hawthorne Heights sued Victory Records, trying to escape an obligation to make two more albums. The suit accuses label owner Tony Brummel of damaging the band's reputation and defrauding it of more than $1 million in royalties.

Last week, Victory filed a countersuit against Hawthorne Heights for libel and breach of contract. Victory claims that the bandmates are "willing to say anything -- no matter how untrue or defamatory -- as a strategy designed to free themselves from their legal obligations to the independent record label that made them famous, in favor of the 'greener pastures' and financial inducements offered by so-called 'major' record distribution companies."

Attorney Robert Meloni, who represents Victory, has confirmed that the label sent a cease-and-desist letter to Virgin Records and its parent, EMI, two weeks ago, forbidding the major from continuing discussions with Hawthorne Heights until the contractual issues are resolved.

The origins of the beef go back to February, just before Hawthorne Heights released its second album, If Only You Were Lonely. In an e-mail leaked on the internet -- allegedly from Victory's director of street promotion, Abby Valentine -- promotion team members were encouraged to remove the CDs of R&B artist Ne-Yo from store racks.

Ne-Yo's album, In My Words, came out the same week as Hawthorne Heights', and the strategy might've helped Hawthorne Heights attain its No. 3 spot on the Billboard charts the week of the release. But it also fomented significant ill will toward the band, which some now label as racist. This particularly rankled the band, and it publicly revealed that the e-mail was Brummel's idea.

Brummel was upset with the band for outing him to the press, according to a posting on the Hawthorne Heights site in August that corresponded with the filing of their suit. It claims that Brummel "was more worried about 'rumors' surrounding Taking Back Sunday and Thursday's exoduses being justified than the credibility and reputation of his current biggest band."

Of course, Brummel had his own reputation to consider. He has built his Chicago-based independent label from a hobby into one of the country's largest indies in just 17 years. Along the way he's stepped on a few toes. Asked to comment on Brummel, one Chicago music insider replies, "Hell, no. I have to live in this town."

Hawthorne Heights also claims that it hasn't seen any royalties after selling 1.2 million copies of If Only You Were Lonely and its gold-record debut, The Silence in Black and White. The band members allege that audits by labelmates Atreyu, Thursday, and Taking Back Sunday revealed accounting practices that cheated the bands of substantial royalties.

Management for the three bands refused to comment on the allegations or whether any lawsuits were pending.

"Our situation with Tony Brummel is indicative of issues all bands on Victory encounter on some level or another," Hawthorne Heights' post concludes.

It's all the band has to offer on the matter, by advice of its lawyers.

"I'd like to say everything that's on my mind and set the record straight with everybody so nobody has preconceived notions either way, but unfortunately we're not allowed to talk about it," says singer J.T. Woodruff. "It's kind of a heated battle. We don't really have a whole lot of information, unfortunately."

Powerless to change the circumstances of the band's predicament, Woodruff says that the bandmates are planning to put their nervous energy to work on a new album.

"We really want to hammer it out and get focused, and keep this negative thing off our mind," Woodruff says. "I've got to think it's going to be a darker album, because it's been a pretty bittersweet year so far. But then, that's our sound -- bittersweet. There's darkness and light, and the good news is, there's always light at the end of the tunnel -- which is what we sound like."

With Hawthorne's hard-touring lifestyle, there hasn't been the luxury of an extended stay in the studio. The first album was recorded and written during a three-week stretch between tours, right after the band was signed. Sessions for the next album were similarly tight.

So Woodruff's looking forward to the extra time, as well as to going into the studio when the songs are ready. But the group isn't waiting to get started. Though its members have never been ones to write on the road, they're going to try it during the current Nintendo Fusion tour. They've even cleared out the back lounge of the tour bus and turned it into a mobile studio.

"We'd like to take a bit more time writing, this time," he says. "We need to sit back and make sure people are sick of us."