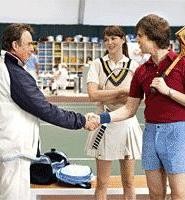 Thornton helps Heder with his Napoleon complex.
One would never confuse the work of writer-director Todd Phillips with that of the late Robert Hamer, whose filmography includes the essential Kind Hearts and Coronets. Hamer's movies had a gentlemanly quality, no matter the cruelty that skulked beneath their prim exteriors; one always felt the characters in his movies would prefer to stab you with your acquiescence rather than simply plunge a dagger in your back. Even the rogues, fools, and thugs had a, well, dignity about them. They could be vicious or inept, but they always had a kind of twisted respect for their poor, pitiful victims.

And then there's Todd Phillips, who is best known for getting Will Ferrell to run drunk and naked down the street. Dignity? Ah, not so much.

That the man who built Old School would enroll in Hamer's School for Scoundrels, after an ill-advised detour retooling Starsky & Hutch as an unrequited gay love story about cops pulling their pieces, seems almost haphazard at first glance -- the doings of a director without direction, a guy who simply hops from gig to gig in search of the next paycheck. But don't be fooled by its origins or its casting -- Bad Santa meets Napoleon Dynamite, literally. In fact, it fits snugly into the burgeoning filmography of the former documentarian. Phillips makes movies about how men behave around other men -- about how even friends'll kick each other in the balls for a cheap grin, how even enemies have more in common than they'd admit, and how we're all more or less a pink slip away from behaving like pre-schoolers with access to alcohol.

School for Scoundrels updates Hamer's film about a man of little confidence who enrolls in a class he believes will teach him self-reliance. That man here is nearly a boy: Jon Heder, who plays a New York City parking-enforcement officer named Roger. Heder, who's still shaking off the role that will define him until he chooses another career path, plays Roger not so much as someone devoured by insecurity but as a kindly simpleton -- like, oh, Tom Hanks in Big, as an actor cutely stumbling through a child-in-a-grown-up's-body routine. He wears kiddie pajamas, mumbles in the presence of the woman neighbor with whom he's infatuated (Jacinda Barrett, last seen offering Zach Braff a Last Kiss), and though he's clearly been on the job for more than an hour, still allows two men not only to get out of a parking ticket, but to shoot at him and steal his clothes without so much as a tepid threat.

David Cross, among the familiar faces appearing in extended cameos that have more meat than most of the supporting roles, suggests that Roger enroll in a class taught by a mysteriously monikered Dr. P (Billy Bob Thornton). There, Roger finds other neutered man-children who live with their grandmothers and take no for an answer, among them Eli (High Fidelity's Todd Louiso), Diego ( Saturday Night Live's Horatio Sanz), and Walsh (Matt Walsh, a Phillips regular and former member of the Upright Citizens Brigade). They're cowards and losers all -- not unlike the men who make up Vince Vaughn's fraternity in Old School, only instead of retreating from the real world, they're trying desperately to find their places in it.

Rather quickly, Roger excels in the class; he gets the girl almost before the second act. (Their brief courtship provides the film with its only truly lousy scenes, among them one involving the liberating of lobsters -- a real sitcom groan.) But Barrett's character is the MacGuffin with the charisma of a McMuffin; most guys I know would prefer the roommate, played by Sarah Silverman (who sure does have a potty mouth), over Barrett, who looks like she fell out of a magazine ad and acts like it too. No matter, of course. She's just there to bring together and yank apart Roger and Dr. P, who spend the film's final half fucking with each other until the inevitable scream of "Uncle!" Their shenanigans, though, are never terribly nasty; Phillips, at least, has that much in common with Hamer -- an affinity for restraint in the drawing of blood.

Thornton, who found his nasty niche in Bad Santa only to seem terribly lost in Bad News Bears, doesn't repeat himself here. Dr. P is a classy, cool brand of vile -- the demented drill sergeant in a designer suit. And Heder, cast in the role of the invisible man, is fine too. The movie wouldn't work without someone as nondescript as Heder, because you can buy him as a do-nothing-go-nowhere man; he's perfectly, wonderfully forgettable, appropriate for a movie like School for Scoundrels.