The Guardian is weighed down by action-movie clichés. 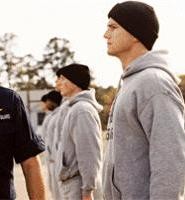 Watching The Guardian, you will learn that the U.S. Coast Guard's rescue swimmers rank among the bravest and least heralded of military personnel, selflessly hurling themselves into raging currents or hurricane swells to save a single human life. But I doubt that even these knights in neoprene armor could rescue an audience from The Guardian's torrent of watery clichés. Here are a few for starters: the grizzled senior chief swimmer (Kevin Costner) who arrives home from work one day to find his neglected wife (Sela Ward) moving out; the deadly snafu at sea and ensuing post-traumatic stress that send our hero from the stormy Bering Sea to a tranquil teaching post; the cocky young cadet (Ashton Kutcher) that we know is a wiseass because he's the only recruit who shows up for boot camp sporting aviator shades; the comely townie (Melissa Sagemiller), who's only interested in "casual" relationships, having been burned by her share of hot-shot aqua jocks. And that's just the first 20 minutes! By the time it's over -- two full hours later -- we will have witnessed countless training montages, Kutcher's acquiring manly wisdom, Costner's transformation from Yodalike guru to messianic martyr, and more false endings than the last installment of Lord of the Rings.

Directed by Andrew Davis, The Guardian is scaled as an epic, but the script (by first-time screenwriter Ron L. Brinkerhoff) is like a 1940s pro-military quickie decked out with more padding than a Berber carpet, and unlike the current Flyboys, it takes no real pleasure in its cornball contrivances. It's leaden. That's something of a surprise coming from Davis, who remains best known for his propulsive big-screen version of The Fugitive, but who began his career with a series of smart and highly efficient B actioners that included two of Steven Seagal's best vehicles: Above the Law and Under Siege. (Admittedly, Davis' more recent résumé includes the aptly titled Collateral Damage.) Here, you can't fault Davis for his handling of action -- the film's perilous open-water rescue scenes are duly visceral -- but he can't disguise his fatigue with the material, and that's the sort of thing that can make a movie sink fast.

The Guardian is not without its token pleasures -- chiefly Kevin Costner, who's aged very nicely into playing over-the-hill former golden boys (see Tin Cup and The Upside of Anger) and who here gets a couple of affecting scenes with a brassy barroom blues singer (the legendary Bonnie Bramlett) that are all about coming to terms with the ebbing of youth. More surprising is Kutcher, whose shit-eating grin and I-fucked-Demi-Moore strut are well-suited to the part of a preening high school swim champ with a thing or two to learn about selfless heroism. (I warn you -- lest you risk choking on your popcorn -- that there are a couple of scenes in which Kutcher actually emotes, which, on the sliding scale that finds Josh Hartnett a suitable leading man, might qualify Kutcher as the Laurence Olivier of the MySpace generation.)

But the crises and characters are so hollow, they don't need to tread water to float. This is that rare movie that leaves you pining for the Jerry Bruckheimer touch.