At Lager Heads, the barbecue is terrific and the recipe's off-limits. 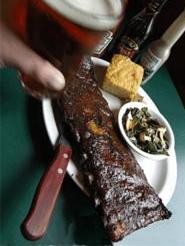 Walter Novak
Ribs so tender, they fall off the bone as well as the plate.
As we tool down the two-lane highways of northwestern Medina County, past tiny towns, forgotten cemeteries, and farm stands peddling pumpkins and apples, the sweet scent of nostalgia hangs heavy in the early autumn air. Inhaling it is imperative, something that even the creeping encroachment of golf courses and gated communities cannot spoil.

We pass the time by conjuring picturebook images of gristmills, feed stores, and Pure Oil stations, where uniformed attendants come out to fill the tank. So when Lager Heads, nestled inside a vintage barn-red building, pops into view, we know we've found the perfect pit stop for our 40-mph trip down memory lane.

The gravel crunches beneath our tires as we glide into a parking space amid a quartet of decked-out Harleys, a handful of SUVs, and a half-dozen hulking Chevy 4x4s, each with a coffin-sized toolbox anchoring its bed. We eye them warily and start to fret that we should've worn our denims and work boots, and left the strappy little sandals in the closet. But then we spot a collection of clean-cut couples playing cornhole on the covered patio out back, and our sartorial concerns evaporate into the autumn air.

Once inside the lovingly remodeled space, with its original roughhewn beams and patinated floorboards, our confidence is entirely restored. Not that there aren't plenty of work boots resting on the foot rail that runs the length of the corrugated-steel and wood bar. But there are cute little sandals, too, along with Nikes, Keds, and even a pair or two of pricey leather loafers.

For co-owner John Kiene, that diversity is part of a larger design. He and his brother Matt launched the tavern in August 2004 with no more highfalutin a goal than establishing a spot that would welcome a wide audience. As bait, the brothers amassed a broad collection of domestic, imported, and microbrewed beers, in bottles and on tap; lined up an ever-changing, genre-busting retinue of Saturday-night bands; and crammed the cathedral-ceilinged barroom and cozy, nonsmoking dining area with everything from turtle shells and bleached deer antlers to plasma TVs and video golf.

On this weeknight visit, the music is loud, the servers are friendly, and the laid-back vibe is a workingman's dream. Then there's the menu, as savory a collection of smoked and barbecued goodness -- ribs, pulled pork, brisket, and wings -- as any road warrior could hope to tackle. Whether we're sucking on the St. Louis-style bones, with their fine, crisp char, or contemplating the southern-style smoked brisket -- so meltingly tender that it can hardly be coaxed off the plate --there's scarcely a flaw in the bunch.

Okay, so the generous stack-up of pulled pork on our "Sloppy BBQ Samich" is slightly dry; a pile-on of crisp coleslaw and plenty of the housemade barbecue sauce -- crafted, Kiene will only say, "from a whole bunch of private stuff" -- resolves that issue. But thick slices of smoked pork tenderloin are stunning: Despite its leanness, the meat is so moist and buttery, we cut it with a fork.

Dry-rubbed, smoked, and slathered in a choice of nine homemade sauces, the whole chicken wings are winners too. We've seen bigger ones, but we've never had any more succulent. We order ours doused with spicy garlic sauce, and the interplay of heat and well-calibrated smokiness -- washed down with a crisp Blue Moon ($3.25) or a well-drawn Guinness ($4.25) -- is about as much fun as a diner can have in public.

Speaking of fun, Lager Heads' homemade beer-cheese soup is a lip-smacking novelty, with the sleek but not-too-heavy broth ladled over a bit of pulled pork, then garnished with chopped green onions and a couple slabs of golden fried potato.

Other side dishes are nearly as good. Served with foil-wrapped pats of real butter, freshly baked cornbread is dense, but not too sweet. Thickly sliced onion rings offer satisfying crunch and heft, and baked beans are plush, satiny, and perfectly seasoned. Only the fibrous collard greens are a disappointment; not even bits of pulled pork can raise the ante on these tough guys.

By and large, the kitchen sticks to what it does best, and other than a few sandwiches, a salad, and the Friday-night fish fry, there's not much on the menu that isn't covered with that sheer, well-balanced barbecue sauce. One exception is the Italian sausage sandwich, featuring a good 12 inches of mild, smoked sausage on a soft, squishy bun.

By the time dessert rolls around, though, the brews and barbecue have done their job, and we pick at a gigantic slab of multilayered chocolate cake (from a commercial food vendor) without much enthusiasm. Instead, our thoughts turn toward the car, where a peck of crisp red apples awaits on the back seat and a long ribbon of asphalt will lead us home.

As the miles pass, the feed stores and gristmills will disappear. But at Lager Heads, the spirit of the rural roadhouse is alive and kicking.