Love Is His Religion

The second coming of Ziggy Marley. 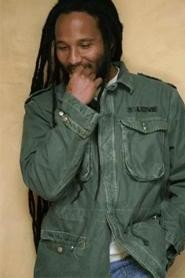 Ziggy Marley's new sense of purpose makes for a righteous album.
Unless your name is Jakob Dylan, Julian Lennon, or Frank Sinatra Jr., it's doubtful that you can comprehend the weight beneath which David Nesta Marley labors.

Like his aforementioned peers, Marley -- best-known as Ziggy -- is more than just the son of a famous musician. He is the heir to a throne, the scion of a symbol -- which makes him both a king and a symbol himself. It's a legacy that Bob Marley's first-born has seemed to alternately embrace and elude during his nearly three-decade career.

The Ziggy Marley who has just begun his latest American tour sounds like a man who has finally found his crown. Love Is My Religion is more than just the title of his second solo album -- it's his mission statement.

"This is my true purpose," the 38-year-old Marley says during a phone interview from a tour stop in Portland, Oregon. "I feel guided. I feel inspired. I feel determined. This is definitely a new chapter in my life."

These days, he's more self-determined than ever. Like his father, Marley is a humanitarian, supporting causes ranging from youth AIDS awareness to the genocide in Sudan. And Love Is My Religion is rooted in the Jamaican reggae Bob Marley made a worldwide music.

But it also finds the son taking several significant steps on his own. One is a distribution deal he negotiated with the retail giant Target, which is selling Love Is My Religion exclusively. Another is his decision to play almost all the instruments on the album himself, in stark contrast with his use of the big-name talent he recruited for 2003's Dragonfly, Ziggy's solo bow after almost 20 years in the Melody Makers with brother Stephen and sisters Cedelia and Sharon.

But most important is his recent spiritual epiphany. It occurred, Marley says, during a conversation with a woman who told him that she was a Catholic; when she asked him his own faith, he instinctively replied, "Love is my religion." The idea "was something I think existed in me a long time ago, but I couldn't put it into words," he muses. "But when I said it, I felt the ding!"

About two minutes later, he wrote the title track for his new album. It's a warm and radio-friendly blend of old-fashioned roots and modern production.

Marley says that his belief is congruent with all religions. "I'm not here to destroy what people believe. I'm shedding more light on Allah, on Yahweh, on Jesus Christ. Love is their philosophy too."

His take on the Target deal is casual to the point of nonchalance. "It's OK. It's not like it's for a thousand years, or forever," he says. "I'm not concerned with the machinery of it, really. I like my freedom, and I'm free right now."

Marley has explained his affiliation with Target by citing his father's never-fulfilled desire to release an independent album. But was the deal also motivated by dissatisfaction with RCA, which oversaw the lukewarm response to Dragonfly? "Nah," he insists. "I'm too positive to be disappointed."

Last year, Ziggy's youngest brother, Damian, released Welcome to Jamrock, a hip-hop-spiked reggae album that generated the most sales for a Marley since Ziggy was crooning "Tomorrow People" in 1988. But Ziggy brushes off any notion of sibling rivalry. "It's just normal for us," he says, after a pause. "We're not excited by these types of things." That said, Marley admits that he and his brothers have been mulling over a new album together.

First, though, there's his own tour, which he hopes will reach various global hot spots. Marley, whose wife was born in Israel, played Tel Aviv last summer, during the hostilities between Israel and Lebanon. He came away believing that "my convictions were strong enough that fear could not stop me from going anywhere on the earth." Next, he'd like to take his gospel of love to the Muslim world: "I want to travel to their house and give them the message."

It's not terribly surprising that Ziggy has grown into the leadership role that his father once occupied, but surely there must have been dark moments along the way, when he was criticized for failing to fill his father's huge shoes?

"There was a point of being down," Marley admits. "Not because of the questions, but because of the luck. Me father sing. Jesus, Martin Luther King, they give a lot of things to the world. And sometimes me think, 'Shit, what is it gonna take? The things that I do, is it gonna make any difference?'"

That question has apparently been answered by Marley's new album -- and his omnipresent family tree.