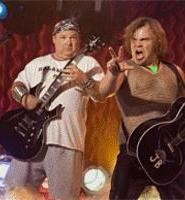 Dudes, it was old eight years ago.
The first few minutes of Tenacious D in ³The Pick of Destiny² are something to behold: a four-minute rock opera cranked to 11. A doughy young boy with dirty-mop locks (Nacho Libre's Troy Gentile, once more playing lil' Jack Black) laments his tragic plight: He's stuck in Kickapoo with "a humble family, religious through and through," that just doesn't get his tasty jams.

The kid struts into the kitchen, an acoustic guitar slung over his shoulder, and starts singing: "If you fuck with me, I shall fuck you too." His old man (Meat Loaf, nice) leaps from the table to take the boy over bended knee for a good beltin'. The boy, weeping and singing with Jack Black's voice, prays to his poster of Ronnie James Dio. The Ozzy Osbourne sub sings back, naturally, demanding that the child embrace his inner demons and run away from his nowhere town to form "the world's most awesome band." Guitar in tow, the boy leaps from his window and escapes into the night; where he'll land, only Dio knows.

Oh, if only the movie had the balls to keep up its rock-opera facade. What's the worst that could have happened? It turns into The Rocky Horror Picture Show? There are greater sins. But, alas, after the thundering opening credits that look as though they came from the mind of a Dungeons & Dragons burnout, the movie straightens up and flattens out. It winds up as just another sketch extended past the point of no return.

That we're even discussing a Tenacious D movie more than a decade after Black and Kyle Gass formed their heavy-metal homage/parody suggests that they're too late to their own party; already there have been myriad Saturday Night Live and Mr. Show appearances, the short-lived HBO series, and the 2001 album, not to mention Black's role in School of Rock, which capitalized on his performance as, well, more-or-less Jack Black in High Fidelity, which was already exploiting his stint in Tenacious D.

Perhaps it's unfair to see or write about Tenacious D in a sober state; after all, the funniest gag in the movie precedes it, during an animated sequence that parodies the THX intro. "The audience is baking," claim cartoon caricatures of Black and Gass, promoting their movie as having been shot in "THC."

The plot here, such as it is, recounts Black and Gass' first meeting and the origins of the name Tenacious D. (It has something to do with an "ass mark," though it's best to leave well enough alone at this point.) In short, Gass (a straight man trying way too hard to keep up with Black) and Black (just trying way too hard) attempt to write the greatest song in the world, can't, realize they need the devil's knocked-out tooth to accomplish such a feat, and go looking for it at a rock and roll museum. Along the way, they encounter Ben Stiller as a Guitar Center salesman who looks like ashtrays smell, Tim Robbins as a German missing a leg ("Man, I miss that sweet-ass leg"), John C. Reilly as Bigfoot, and Amy Poehler as a waitress with a black eye. By the time they get to the protracted car-chase scene, you'll wonder whether Gass and Black are on a mission from God or Satan -- who, d'oh, finally shows up in the form of Foo Fighter Dave Grohl.

Directed by Liam Lynch, responsible for the novelty single "United States of Whatever" and the time-wasting musical sequences in Sarah Silverman's concert doc Jesus Is Magic, Tenacious D is utterly harmless and totally pointless. Black and Gass have been at this so long, their dirty little joke has all the punch of a Catskills routine.