When Punks Grow Up 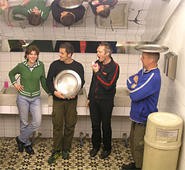 Andy Moor (second from left) cleans up Ex's punk roots.
For the graying fans of late-'70s punk, dropping by the local Hot Topic is like rubbernecking at the mangled wreckage of the culture of their youth. It's a place to stand agape before a wall of faux vintage tees, where a Transformer logo and "Mustache Rides: $0.25" sandwich the Clash's London Calling.

Welcome to punk rock 2.0, not so much a musical style as a consumer demographic. And when you talk to Andy Moor, guitarist of the Ex, one of the movement's seminal outfits, his point is crystal-clear: "We listen to almost no guitar music. No punk rock."

But just like the Sex Pistols, the 25-year-old Dutch outfit began life churning-out manic three-chord bangers. The Ex, in fact, helped to define the music's anti-authoritarian stance. But when the sound of that very stance -- the Ramones' "Blitzkrieg Bop" -- is used to hock Diet Pepsi, how does dissent adjust? Maybe the answer lies with a bunch of middle-aged Dutch dudes jamming with a 72-year-old saxophone colossus from Ethiopia: Gétatchèw Mèkurya.

"We were fanatic about that stuff," Moor says, remembering the first time he heard Mèkurya's music -- a brand of fiery Afro-pop that takes as much from American free jazz as it does Fela Kuti's tribal funk.

When the Ex celebrated its 25th anniversary two years ago, Mèkurya was in attendance and was so taken by the performance that he asked the band to play in Ethiopia, where the saxophonist has been revered since that country's short but intense cultural revolution of the early '70s. Mèkurya, who speaks neither English nor Dutch, and the band got along so well that he suggested they make a record together -- a loose remake of Mèkurya's 1972 cassette that Moor and company had discovered so many years earlier.

To prepare for the sessions, the Ex first worked out the tunes by itself, then met up with Mèkurya in Holland. "In most cases, he thought what we had come up with sounded great, or he would say something like 'too fast' or 'too slow,'" Moor explains from the Chicago offices of the Ex's label, Touch and Go. "Sometimes it would be, 'You solo, me solo, you solo, stop.' And other times, it was just sign language. In that way," he says with a laugh, "it wasn't so different than how we usually do things as a band."

But in the context of its long history, "usually" is difficult to pin down. Sure, the Ex started out punk as fuck. With such emotionally charged anthems as "Weapons for El Salvador" and "Apathy Disease," the band unleashed primal, distorted noise, while singer G.W. Sok cracked wise and preached politics.

But over the next 20-plus years, the band outgrew the narrow definitions of punk. Its ceaseless evolution led to the release of a record nearly every year, including collaborations with avant-garde cellists, members of Sonic Youth and Chumbawamba, and a 20-member big band called the Ex Orkestra. These days, the band is a four piece that has as much in common with African jazz at it does with populist punks like Green Day.

Moor credits their longevity to the fact they've never overdone it; the band, as he says, is not their life. Between all the touring and recording, they maintain a litany of side projects. Moor himself has scored a number of notable performances, including a staged version of the Wim Wenders film Wings of Desire. Also, when the phone rings for an Ex tour, the band makes a set list of two-thirds new material -- just to keep things interesting.

So what happens when some particularly astute old-school punk fan calls out for a chestnut like "Gonna Rob the Spermbank?"

"We don't do any of the early stuff anymore," Moor says. "Some songs have a life of their own, and, as the person who made them and has to play them, you just know when they're finished. But there are some songs you can play a thousand times, and they just seem to last. You can play them, and every night they are alive."

Early disco-punk toss-offs like "Gonna Rob the Spermbank" are evidence that the Ex's influence remains very much alive. Whatever they nicked from that spermbank birthed second-generation punk bands like Gang of Four and third-generation revivalists like the Rapture. But by fusing Western punk and world music, the Ex sounds similarly revolutionary today.

So how does it feel to get listed among the most influential punk bands of all time?

"I like the influential bit," Moor admits. "But punk -- we don't play that anymore, and we haven't for decades, and it's funny that we're still thought of that way. Our influences are African music, and drum & bass and dubstep and hip-hop and Eastern European music. Almost anything but guitar music. We take those that we heard and translate them back to the guitar, and we've been doing it like that since 1979. But punk rock? We're not a punk band. I don't know what it means to be a punk band anymore."