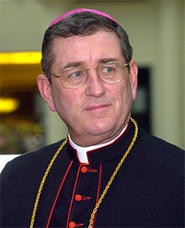 Bishop Lennon
Cleveland Bishop Richard Lennon makes a brief appearance in a new documentary about sex abuse in the Catholic Church. Critics are hailing his performance as "richly dark," "menacing," yet "stunningly predictable."

The movie, Hand of God, recently aired on PBS's Frontline. (See Lennon in action at pbs.com/frontline.) In it, filmmaker Joe Cultrera chronicles the life of his brother Paul, who was molested as an altar boy by a Massachusetts priest.

Lennon, named Cleveland's bishop last May, was serving in Boston when the film was shot in 2004, the "supposed warm and gracious replacement" for Cardinal Bernard Law, Friend to Child Molesters Everywhere™. But Lennon appears about as kindly as a roundhouse to the pancreas.

As Cultrera films outside a Boston chancery, Lennon approaches, sticking his hand in Cultrera's lens. The filmmaker calmly explains that he needs shots of the building where his brother reported his abuse. When Lennon resists, Cultrera's emotions start to bubble. "I did 12 years of Catholic school," he tells Lennon. "My family put so much money into this church."

As PR opportunities go, this is a fastball down the middle: All Lennon has to do is apologize on the church's behalf -- even if he doesn't mean it -- and be hailed as warm and gracious, indeed.

But the bishop proves to be a complete dick. "Sir, if you think you're going to make me feel bad about this . . .," he says flatly.

"I know you guys don't feel bad," Cultrera responds. "You don't feel anything."

The back-and-forth continues before Lennon decides he's got better things to do -- save for one parting shot.

"It's all in your head, sir," he says, towering over the much smaller Cultrera. "You're a sad little man."

Cultrera, who lives in New York, says he wasn't surprised by Lennon's response. "What surprised me is that he did it in front of the camera."

Punch called the bishop, curious to see if he'd viewed his gut-wrenching performance. But Cleveland Diocese spokesman Robert Tayek says neither Lennon nor the diocese would comment: "We really don't talk to the tabloids." (Ouch. Coming from the flack for an organized pedophile ring, that really hurts.)

Cultrera, 48, says he's received several e-mails from Cleveland Catholics, ashamed at Lennon's cameo. Some parishioners have even written the bishop, Cultrera says. He doubts they'll get a response.

Inefficient efficiency
Nine months ago, when Mayor Frank Jackson created his Efficiency Task Force, a new comedic era was born. There's no way one can use "Frank Jackson" and "efficiency" in the same sentence without embarking on a wonderful path of misadventure and mirth.

The task force recently released the "first phase" of its study, which includes such breakthrough recommendations as Maybe We Should Answer the Phone. And to think it took only 131 people working 3,650 hours to come up with such revolutionary ideas.

But it gets funnier, boys and girls. The task force also examined the building and housing department, a perennial powerhouse in the Most Incompetent Arm of Government Division. Unfortunately, the city had already hired an outside consultant, LeanFirm, to conduct the exact same study. The "first phase" of its report was made public last fall. After all, why do a whole report when there's cool phrases like "first phase" at your disposal.

Now if that doesn't make you believe in Cleveland, nothing will.

Breaking news . . .
Last week, the Akron Beacon Journal made a startling discovery: High school kids like to -- gasp! -- party and use the F-word!

It seems columnist Bob Dyer was bored one day, so he decided to troll MySpace, where all those wacky kids hang out. What he found was absolutely shocking! "In addition to countless photos of underage kids swilling beer and booze," he wrote indignantly, "you can find an endless parade of fresh faces dropping enough F-bombs to flatten a small nation."

Dyer's editors -- apparently sealed away in a time capsule since 1893 -- were so alarmed by this breaking news that they ordered a front-page exclusive! Dyer's investigation uncovered one Archbishop Hoban girl who claimed she was "pretty good at partying," a Copley girl who says, "I hate my life, it's so fucking gay," and a Green High girl whose interests include "dancing, camping, fishing, science, spiritual things, getting fucked up."

Absolutely shocking!
Spurred by these dramatic revelations, the Beacon is now planning further probes into the murky underworld of high school kids. Next week's investigation: "Teenagers Don't Always Get the Proper Nutrition!"

A pervert's payday
Clarence Bogan isn't the most credible guy.

A creature of the Ohio penal system since his 1980 conviction for rape, Bogan added to his résumé in 2003 when, during a stay at the Cuyahoga County Jail, he sexually assaulted another male inmate, then attacked a guard.

Yet it's all just a big misunderstanding, Bogan claims. He's the victim here. Since the early '90s, he's been filing endless suits claiming guards have beat him, tortured him, and, of course, covered it up. Without a conspiracy, there'd be no other way to explain the lack of evidence.

Each time, judges have expeditiously dumped the cases. Yet here in Cleveland, we have a soft spot for whiney pervs.

Bogan sued the jail in 2003, claiming guards beat him, shackled him, and left him to sit there for two weeks. Two years later, Assistant Cuyahoga County Prosecutor Charles Hannan, attorney for the jail, agreed to settle for $4,000. It's not much for the average joe, yet it's quite a windfall for a guy who's been eating prison loaf for 25 years.

"I was so against that," says Warden Kevin McDonough. "He's one of the more despicable guys I've ever met."

Ryan Miday, spokesman for the prosecutor's office, says the jail still denies Bogan's accusations; they just paid him "to spare county jail officials from the burden of enduring litigation." That's lawyerspeak for, "If we pay you, will you pleeeeeaaaase go away?"