With Blue Lunch. Thursday, May 31, at Wilbert's. 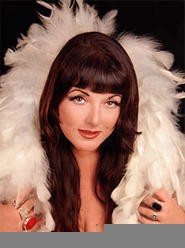 Candye Kane found herself in some trouble this spring. The bawdy blues singer recorded a version of "Female Trouble," the title track from the 1974 John Waters film. This resulted in a permission squabble with Waters, the song's co-writer, and the tune was eventually pulled from Kane's new disc, Guitar'd and Feathered.

It's just another strange twist in a life far more wild than anything found on Desperate Housewives. In the '80s, the poor, single, teenage mom from East Los Angeles became a cover girl for such adult mags as Hustler and Gent. Later, Kane returned to her true love: singing -- scoring a deal with CBS/Epic. But the label dropped her after they discovered her controversial past. Undeterred, Kane has gone on to record eight impressive albums for Sire, Rounder, and Ruf. A feminist and a convert to Judaism, she also fights the good fight against sexual discrimination and censorship.

Ultimately, it's Kane's big, bold voice that makes her memorable. She can belt out the blues with the power and passion of a Ruth Brown or Etta James. Ironically, Guitar'd and Feathered is her most adult disc to date -- adult in the sense that she downplays novelty numbers and delivers a strong, sassy set of classic blues. So be prepared for a tail-feather-shaking good time.