Tower City's new restaurant misses the mark as often as it scores. 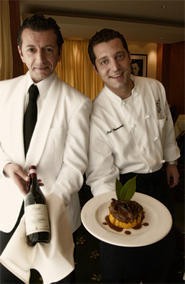 Eartha Goodwin
Server Oscar Califano (left) and Chef Luigi Iannuvario offer a tender osso buco paired with a well-balanced Barolo.
Whether it's snappy housemade pasta or falling-off-the-bone osso buco, dishes from the Italian cucina spell comfort for many Clevelanders, and we're always on the lookout for sassy variations. Of course, there's a flip side to this particular florin: With so many options to choose from, any place that doesn't deliver service, style, and a certain amount of sizzle is apt to be a disappointment.

Which brings us to the so-so Bice, which opened in Tower City on March 8 and is part of a New York-based restaurant group. Slightly stodgy, vaguely bland, and with sluggish if well-intentioned service, Bice brings little to the table that is interesting or new.

According to corporate legend, Bice originally began in Milan in 1926 as a friendly neighborhood showcase for talented home cook Beatrice (Bice) Ruggeri. Since then, it has grown into an international chain, with outposts in Beirut, Tokyo, and Palm Beach, among other exotic locations. Cleveland marks the company's 25th toehold, and with its white linens and sharply attired maître d's, it's a far more formal setting than Nonna Bice probably ever could have imagined. Yet despite its claim to Euro-style elegance, Bice's ambiance still feels surprisingly generic: Its interior is restrained and spare, with a sort of mid-century "moderne" sensibility that says little about this particular time and place, or the contents of the restaurant's pantry.

Still, the appointments aren't without charm. Take the miniature coat racks, for instance -- small wrought-iron stands placed tableside to hold signoras' purses. And come evening, the honeyed glow of gauzy-shaded ceiling lamps seems carefully calibrated to meet the needs of the mainly middle-aged patrons: bright enough to read by, but dim enough so that everyone looks vaguely young and lovely. Also promising: The infernal Sinatra -- the bane of far too many ristorantes -- appears to have been banished from the premises. Unfortunately, his replacement on a Friday evening was a jangling soundtrack of electronica, which a companion aptly dubbed "Symphony for Cell Phones."

None of this would matter much, if the fare were uniformly fine. It wasn't. Under the direction of Milanese chef Luigi Iannuvario, the kitchen seems to miss the mark nearly as often as it scores. Certainly it's not for lack of targets. Chock-full of soups, salads, pastas, fish, steaks, and chops, the dinner menu is a big one. It also undergoes weekly revisions, although signature dishes like Pappardelle al Telefono (freshly made pasta ribbons in a lush basil, tomato, and cream sauce) and osso buco served on a bed of satiny saffron risotto are always available. In addition, lunchtime guests can consider toasted panini (say, grilled eggplant, radicchio, and goat cheese on focaccia for $7) or, on weekdays, the daily special -- anything from grilled striped bass with string beans ($19) to baked rigatoni with meat sauce ($16).

We launched our own midday explorations with soup. My companion enjoyed the soup du jour, a smooth, satisfying cannellini bean purée, fragrant with olive oil and rosemary; I had a thin vegetarian version of minestrone, bereft of the usual pasta and beans. Among our chosen entrées, my guest dug into the plush Pappardelle al Telefono, slathered with melted mozzarella and rich tomato cream. But I could only stare in envy, stuck as I was with the rigatoni -- a brick of flaccid pasta, ground beef, and pancetta, bound together by an oily gravy.

The same inconsistencies surfaced the next evening. On the upside, count a starter of lightly breaded and fried calamari -- milky rings, as well as crisp, wispy tentacles -- served with a bright, peppery marinara; finely julienned threads of zucchini and summer squash provided dainty hints of contrapuntal sweetness. Equally fine was the tender, housemade gnocchi, doused in Gorgonzola cream sauce and garnished with bits of toasted walnuts. But then there was the spaghetti alla Bolognese; while the freshly made pasta had bounce to spare, the slow-cooked sauce somehow sidestepped the deep, meaty savor that marks the best of its breed.

To drink, Bice offers a cocktail menu ranging from Bellinis to Sex on the Beach. There's also an impressive international wine list, with 25 choices by the glass and 200 by the bottle, including an enticing if pricey roundup of Super Tuscans, amarones, and Barolos. We settled on a 2002 Marchesi di Barolo Barbera, a well-balanced Piedmont-region red that complemented everything from the calamari to the massive portion of meltingly tender osso buco.

Savory and succulent, that braised veal shank was the evening's standout, even if the promised hint of truffle oil was conspicuous only by its absence. Now it was my companion's turn to feel ill served, faced with a dinner of three medium-size shrimp, each wrapped in a strip of moist but odoriferous sea bass. On the side, a viscous portion of what was alleged to be butternut squash purée offered all the appeal of Vaseline.

Inattentive service and slow pacing merely compounded the tedium, to the point that we took the radical step of skipping dessert. Of course, the previous day's lunchtime choice hardly proved motivational. A thick, tart-like wedge of "Italian apple pie," with cherry jelly and sautéed apples, it couldn't hold a candle to Mom's all-American version.

Likewise, Bice itself doesn't quite measure up to our homegrown ristorantes. Maybe in Kuwait or Monte Carlo, it could make the cut. But in this town, when it comes to Italian cuisine, we speak the language fluently.