The Chariot on Fire

Believe it or not -- Christian metalcore dudes can rage without rage. 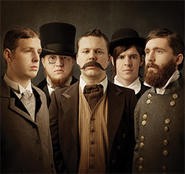 The Chariot gives you some old-time religion, metalcore-style.
Some serious art is going on behind the Chariot's brutal noise, destructive stage show, and Jackass-like antics. And while no one is ever going to mistake the band for Radiohead, its music is just as significant. The Fiancée, the Chariot's new album, sees the Atlanta quintet join hard rock's most aggressive vanguard, which includes Converge and the Dillinger Escape Plan.

However, unlike the majority of his peers, frontman Josh Scogin says his Christian metalcore crew only sounds aggressive. "In the Chariot, it's not a feeling of anger or hate," he explains, phoning from Kansas City, two weeks into a tour cycle with no end in sight. "I grew up in a middle-class home with parents who love me, and I can't relate to [rage]."

Indeed, Scogin exudes a warmth and happiness as we talk. The enigmatic singer is a believer, not a Bible-thumper. He's equally comfortable leading his friends in prayer or setting them afire. His passions range from fireworks to art.

Inspired by extreme-Christian-music pioneers Zao, one of the first bands to prove that hardcore and religion were compatible, Scogin has helped develop the style of metalcore most often referred to as "brutal." It's an accurate label for the genre's throat-rending roars, grinding guitar outbursts, and concussive percussion.

Scogin was the original singer for Norma Jean. Not only did Norma Jean, along with groups like Demon Hunter and Underoath, make Christian hardcore a distinct new genre, but they also broke into metalcore's elite by turning up their amps and toning down their rhetoric. Many a rock fan was surprised to learn that you could have tattoos and love Jesus. And even those who weren't believers couldn't argue with the go-for-the-jugular riffing.

But just as Norma Jean's debut album was about to drop in 2002, Scogin left the band and quit music altogether. "Some people find it weird, because the band was on its way to being so successful. I've never really cared about that," he admits.

Instead, Scogin married his girlfriend and spent two years in newlywed bliss, eventually turning his creativity toward visual art, including photography and drawing. Then he started writing songs again. And when he started thinking about a new musical vehicle, the Chariot's name, from the biblical story of Elijah, came to him.

"The Bible talks about the chariot of fire," Scogin explains. "This guy was so in tune with God or whatever, and God decided to call him up as he was. He didn't have to go through the death process. I thought that was a really interesting story."

He soon put together a band, and 2004's video for the blunt-force-trauma-single "The Company, the Comfort, the Grave" took the group to Headbangers Ball. Leaving behind a trail of broken basses and destroyed drums on the all-ages club circuit, Scogin and the band documented their live gigs on The Chariot: One More Song, a DVD that accompanies the new album. From Cleveland to Seattle, the ringleader takes his band through a series of assorted distasteful misadventures, including atomic wedgies, burned arm hair, various firecracker games, and the Citizen Kane of puke-after-chugging-a-gallon-of-milk scenes.

Although the Chariot comes off like a band of pranksters on the DVD, the new album is dead serious. At just under 30 minutes, the 10 tracks are a weaponized fusion of hardcore, heavy metal, and noise; imagine a deep-voiced demon screaming over Nirvana's "Tourette's" for a half-hour. Like Converge and the Dillinger Escape Plan, the Chariot moves beyond conventional song structures, with guitarists Jon Terrey and Dan Eaton playing erratic outbursts that verge on industrial noise.

Scogin says the band's "random song structure" approach isn't a high-concept deconstruction, but just an instinctive rejection of the dull parts. If it gets under your skin, it stays. "We want stuff that, to some degree, is aggravating or annoying," explains Scogin. "When we write songs, if we have this one riff that we like, and we want to rock it for seven minutes or whatever, that's what we do."

While The Fiancée definitely sounds like an exercise in hostility, Scogin says only one track, "'Forgive Me Nashville," is about the power of anger -- and it's not praise. It's a reminder of the one time he did put some negative energy in the tank. "Nashville is one of our favorite cities to play, and I had one of my worst shows ever. And it was 100 percent because I was being stupid. The whole time I was playing, I was just acting like an idiot -- furious. Here I am, ruining the one show I know is going to be a good time. And I wanted it to be there, in front of my eyes, for the rest of my life: something that will always remind me that the show comes first."

The lyrics are also viscerally emotional. In the full-throttle "Back to Back," Scogin's first discernible words are "We both know we're both going to die." Later, in "The Deaf Policeman," the music grinds to a halt as Scogin blurts, "If there is blood on the roots/Then there is blood on the branches." He admits it's not a very New Testament lyric. But like his band, the Bible is not all sunshine and smiles.

"It translates to 'Whatever's on the inside's going to come out' -- not literal blood. That is imagery," says Scogin. "I've read a lot of the Old Testament, actually, and there's some wild stuff that goes on -- stuff I can't claim I necessarily understand. But a lot of the imagery comes out very strong and abrasive."