In a Class of My Own (5 Star Organization) 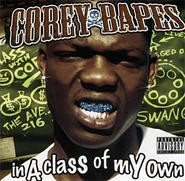 Corey Bapes isn't the greatest MC of Cleveland's hip-hop renaissance, but his grill is definitely in a class of its own -- simply check out his debut's foil-embossed cover. The track listing, meanwhile, boasts two songs about "Swagg" and plenty more about green in general. This focus on gettin' paid pretty much sums up the worldview of Mr. Bapes, who'll celebrate his 18th birthday this week.

Class' real stars, however, are the hip Cleveland production duo known as the Kickdrums. They oversee the entire album, turning in a fine collection of minimal, crunk-influenced grooves, with "Gettin' Money" the clear standout.