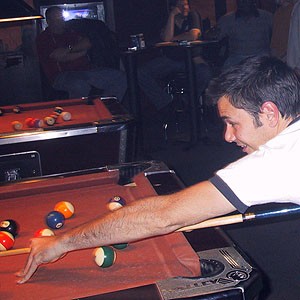 Gay pool fans rack up the balls tonight for the second half of the weekly Shooters Pool League. Teams representing local gay nightclubs chalk up their cues every Monday night till a champ is crowned in early April. “The vast majority of the league is just your average pool players who miss as many shots as they make,” says league commissioner Dave Wolf. The group was founded in 2004 after Wolf spent years playing friendly matches at his favorite watering holes. “But there seemed to be an edge missing from playing casually,” he says. “While I never intended to start a significant league -- just get a few gay friends to play competitive pool -- it’s quickly evolved beyond what I imagined.”
Mondays, 7:30 p.m., 2007
© 2023 Cleveland Scene