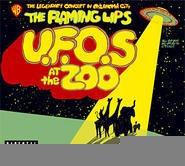 DVD -- U.F.O.s at the Zoo: The Legendary Concert in Oklahoma City: The Flaming Lips are among the planet's best live bands. This September 2006 performance at their hometown's zoo includes staples like costumed fans dancing onstage, fake blood, and lots of confetti. There's backstage footage of frontman Wayne Coyne frolicking with animals and fans prepping for the interactive show, but in-concert versions of "Yoshimi Battles the Pink Robots" and "Do You Realize??" are out of this world.

CD -- Cross: The year's best disco album made by a pair of gadget-loving Frenchmen bounces over many, many genres. Punk-style distortion, old-school table tricks, and woozy techno beats collide in a barrage of giddy sounds. Frantically playful songs like the summertime jam "D.A.N.C.E." will have you chanting along with the footloose chorus of rhyming school kids.

CD -- Eat to the Beat: This reissue of Blondie's 1979 pop classic adds a DVD that includes a 12-track music-video collection the band made to promote the record back in the day. It's an intriguing artifact from the pre-MTV era. But the real draw is the hook-filled sequel to the previous year's breakthrough album, Parallel Lines. Faves like "Dreaming," "Union City Blue," and "Atomic" rank among the group's best.

VIDEO GAME -- Puzzle Quest: Challenge of the Warlords: This addictive game (for the Nintendo DS and PSP) unites geeky role-playing with brain-taxing puzzles. The story has something to do with a sword-wielding hero, out to clear his homeland of various evildoers. There are more than 150 quests, in which players square off against foes by matching colored gems. But beware: Vampires, zombies, and other creatures would rather eat your soul than engage in a friendly battle of skill.

DVD -- The Simpsons: The Complete Tenth Season: Hot on the heels of the mega-successful Simpsons Movie, these four discs gather all 23 eps from the 1998-99 season. Guest stars include Alec Baldwin, Elton John, and Mark "Luke Skywalker" Hamill -- who makes an appearance at a nerdy sci-fi convention. Best is "Viva Ned Flanders," in which Homer takes his neighbor-ino to Vegas, where they get hitched to hookers.

COURTESY FLUSH, PLEASE -- Reading Comics: How Graphic Novels Work and What They Mean: Think comic books are fun? Wait till you get a load of this overly analytical tome, which breaks down what Sin City, Batman, and the X-Men are really about. Writer Douglas Wolk puts comics in historical context and offers a list of must-read books. Then he piles on all the scholarly talk about the significance of men in tights. Verbal kryptonite.