Comic makes an impression in his own style. 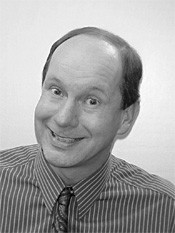 Stand-up comedian Dan Long hates giving interviews. He says it reminds him of when he was a kid. “The police would say, ‘Come on over here. We just want to talk to you,’” he recalls. “And right away, I’d clam up.” Long -- who made his bones on Los Angeles’ comedy scene, but now lives in Ravenna -- says he wants his comedy to do the talking. @cal body 1:Or rather, he lets his impressions of wrinkly celebs do the talking. Long’s repertoire of voices includes standbys like Jack Nicholson and Clint Eastwood. It’s his presentation that differs, he says. “It’s all been done before, so I do a parody of an impressionist. It gets more ridiculous as the night goes on.” The routine usually culminates with the comic juggling three do-it-yourself nuclear devices onstage. “I’m a goodwill ambassador from North Korea,” he says.
Sat., Aug. 18, 8 & 10:30 p.m.
© 2022 Cleveland Scene