Something to Talk About (Atlantic) 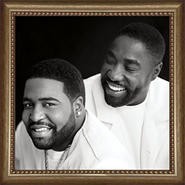 After last year's tragic death of his son Gerald, Eddie Levert Sr. must have found assembling this disc more than painful. But the second and presumably final collaboration between the O'Jays' singer and his rightful heir reflects little of that anguish. Instead, it's the album fans of both men would have wanted, filled with low-key, trend-free R&B that places a premium on the Leverts' powerful and very similar voices.

The only obvious misstep is the title track, which had little hope of competing with Bonnie Raitt's original. But it's counterbalanced by "The Simple Life," a lovely ballad that preaches anti-materialism, but seems to echo the well-documented loneliness that lay behind Gerald Levert's love-man persona. Driven gently home by burnished voices, the reminder not to ignore life's small pleasures is the album's saddest, wisest song -- and something to talk about indeed.