Arrows Are All You Know (Exit Stencil Recordings) 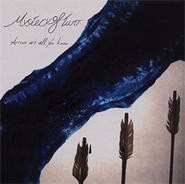 Like so many indie bands these days, Mystery of Two's chief inspiration is post-punk and British DIY. But unlike Interpol and the Rapture, the Cleveland trio primarily takes its cues from Ludus and the Desperate Bicycles, not Joy Division and Gang of Four. As you can probably guess, this is a pleasant surprise. Please, America -- no more angular funk.

Arrows Are All You Know, MoT's sophomore effort, shines its spotlight squarely on the Nick Cave-like groans of vocalist and axeman Ryan Weitzel. Although he's a striking shouter, the band's palette is limited: indie strum, guitar fuzz, simple grooves, a blues lick or two. That wouldn't be an issue, if the trio hadn't applied such a flat, by-the-numbers production to this 10-track disc. Pop minimalism, by its very nature, demands novel recording techniques that lend texture and space to the music. But as it is, we can only imagine what a jam like "Desolate" would sound like had it been produced like a Homosexuals single.