Veal Stock for the Soul

Michael Ruhlman's new book inspires. The rest is up to you. 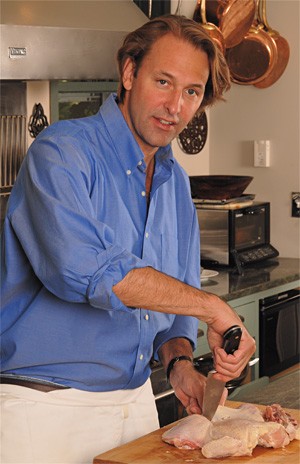 Donna Ruhlman
Michael Ruhlman: Put stock in what he says.

"Taking this one item . . . and adding it to your kitchen is like taking the four-cylinder engine of your Mitsubishi and turbocharging it," he vows with characteristic fervor. "It's like magic, like getting your wings."

I don't own a Mitsubishi, Mike. But I am raring to go.

Ruhlman, an award-winning writer, trained professional chef, and nationally recognized food authority, isn't actually standing at my elbow. But I'm armed with the next best thing: his newest book, The Elements of Cooking — Translating the Chef's Craft for Every Kitchen. Opinionated, witty, and invariably insightful, the slim tome offers inspiration and instruction to serious home cooks. It's composed of eight introductory essays — authoritative homages to fundamentals like salt, eggs, sauces, and homemade stocks — followed by scores of culinary definitions, ranging from the mundane to the esoteric.

Ruhlman's 12th book unfolds like a series of small vignettes, complete with drama, insight, and celebrity name-dropping. But as with all his previous works, Elements is really about excellence, finesse: the idea that paying attention to a few small details has enormous impact on the finished product. His enthusiasm for culinary craftsmanship is contagious — especially his riffs on veal stock, the chef's equivalent of great art. "Few people put veal stock in the same category as, say, the Goldberg Variations or Plato's cave allegory," Ruhlman writes, "and this lack of understanding amazes me . . . If there is a single ingredient that could transform a cook's repertoire at home, it's veal stock."

Show me a foodie who can read those words and not drag out the stockpot, and I'll show you someone with the soul of a stale Twinkie.

Beyond motivation, Elements includes plenty of instruction too, including a rundown of proper kitchen tools, cooking methods, and basic culinary chemistry. It's also chock-full of insider slang, technical how-tos, and a few pokes at the health Nazis who frown on salt and fat.

Still, even seasoned cooks may discover challenges in converting Ruhlman's heart-pumping inspiration into mouthwatering creations. His veal-stock speech sends me right into action, but I immediately realize I don't even own a giant stockpot; fortunately, I know someone who does. "I would have washed it, if I had known you were borrowing it," Ruhlman mumbles as he hands it over. (You can also find the requisite 10-quart stockpot at Sur La Table or The Viking Store, for $75 and up.)

But finding the requisite 10 pounds of "meaty veal bones" is no picnic either. Eventually, I unearth some at Dave's Market, at $1.69 per pound. The tariff? More than $16.

The speed bumps keep coming, reminding me why I prefer restaurants. A 45-minute sojourn in a 450-degree oven leaves those pricey veal bones edged in black char. That, in turn, makes the skimming process a slow go, as bits of carbon have to be painstakingly removed.

Even more worrisome, the developing stock seems particularly unimpressive: thin and flavorless, like dishwater. I scour the text for helpful hints, finally learning that Thomas Keller of Napa Valley's famous French Laundry adds herbs to his stock at this point in the process. Eureka! A few stems of fresh thyme, and this stuff finally starts to smell like food.

Still, even 10 long hours in a slow oven, along with the addition of carefully caramelized veggies and then two vigilant strainings, isn't quite enough to make my stock sing. For that, I turn to the book's essay on sauce and decide to tackle a reduction. Turning three cups of stock into a half-cup of sauce consumes about 30 watchful minutes, but apparently it's the right move: From bland and thin, the stock transforms into a robust, fragrant broth.

That night, still fired with inspiration, I sear a nicely marbled rib-eye in a sizzling cast-iron pan on a bed of kosher salt. While it rests, I toss in fistfuls of fresh mushrooms and sear them to a golden brown, a technique I also crib from the text. Then, improvising, I add some dehydrated mushrooms along with their soaking water and a few sprigs of rosemary, and reduce that liquid to practically nothing.

With a flourish, I pour in my magic elixir — the reduced veal stock — cooking it all down until the 'shrooms are shellacked with a glistening glaze. I drizzle the glaze over portions of the sliced steak, which have been carefully arranged across beds of buttered Amish noodles.

The result? Nothing short of delicious — savory, sophisticated, and, yes, impressive. As Ruhlman promised, the veal-based sauce has transformed a decent dish into something grand, elevating my home-cooking from "dinner" to handcrafted delight. Best of all, my family — during those rare moments when they aren't shoveling it in — is telling me I'm a genius, begging me to "Make this again!"

Sure, it's taken almost 24 hours to get this meal on the table, but such gleeful feedback would be music to any cook's ears. And there's a bigger payoff: The experience, in concert with Ruhlman's book, reminds me why I fell in love with cooking in the first place, and why making great food matters. It's all about caring enough to pursue excellence. If that's not incentive enough to read Elements, you may as well put down your Henckels and turn off the kitchen lights.