Tuesday, December 4, at the Beachland Tavern. 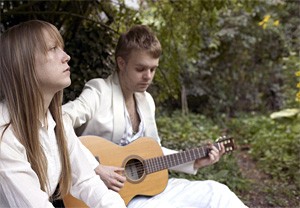 White Magic brings their indie folk to the Beachland on Tuesday.

There are moments on the new White Magic EP, Dark Stars, that recall '60s singer-songwriter Judy Collins. The connection makes zero sense, since Collins is a celestial body with a voice carved from crystal. White Magic's singer, Mira Billotte, is small and grim, with a moan that's as black as 3 a.m. on a moonless mountaintop. Billotte sees herself as more like the young suburban wanderer that she portrayed in the 2004 indie film Chain. "She was a more extreme version of me: struggling, semi-homeless, working really terrible jobs," admits the part-time actress.

But like Collins, Billotte and her band — which also includes multi-instrumentalist Douglas Shaw and a rotating cast of musicians — wipe away the lines that separate acoustic folk, theater tunes, and art-song traditions. "That's what music is all about: creating new sounds that no one has made before," says Billotte. Dark Stars sounds like the score to an off-Broadway show with a modern twist. Billotte and Shaw have ditched the European-derived song structures they used to rely on and replaced them with cyclical compositions and collage-like patterns — which are partially influenced by dub and electronic dance music. Then again, White Magic may be just another role for Billotte.