A reborn crêperie has everything you need — except elbow room. 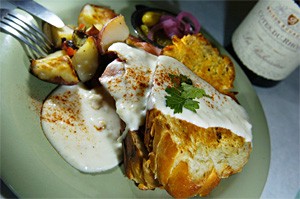 Eight tables, a handkerchief-size kitchen, and a scurrilously embellished set of stairs leading down to the basement restrooms: What is it about this unlikely little slice of Ohio City real estate that leads restaurateurs to keep trying to make it a success?

Ever since 2003, when singularly named Denajua — an ardent Francophile — crafted her first crêpes inside her Le Oui Oui Café, this cramped, triangular space has served up a sometimes-infuriating blend of eccentricity and charm. In April, caterers and former deli operators Joy and Tom Harlor became the fourth set of owners to give it a whirl, naming their new project Le Petit Triangle. While some predictable kinks remain, the Harlors come closest to establishing the space as a viable neighborhood eatery.

To start their makeover, the Harlors repainted and redecorated, helping create at least the impression of airy brightness. Gone is Denajua's beloved doggie mural, the source of the café's former pun-intended moniker. In its place, lending a sense of space and light, are a coat of buttery yellow paint and six handsomely framed mirrors. Tables are dressed with mint-green cloths that echo the hue of the high, paneled ceiling. And while flimsy paper napkins and insubstantial flatware continue to be small sour notes, the white paper table-toppers seem in perfect concert with the European vibe.

Under the Harlors' rule, the café is reliably open every day but Monday. They've also designed a short, serviceable, and moderately priced wine list, developed a beer and cocktail menu, and are working on making space for a four-seat bar. In a nod to the neighborhood's needs, a $5 kids' menu is now available. But the most telling improvements have been to the tiny kitchen, which has been reconfigured to allow space for a stovetop, a prep area, and — check this! — more than one cook at a time. The result is a much-expanded menu, with options ranging from escargot, quiche, and homemade pâté to salads, soups, and sandwiches served on thick slices of Stone Oven bread. While the Harlors have given fondue the boot, there are plenty of omelets. And of course, assortments of freshly made crêpes continue to play a starring role.

Although Tom Harlor has opted for a ball cap in place of a beret, he wields his rabot (the wooden "rake" used to spread the batter) like a pro, rhythmically swirling the egg-and-flour mixture across the hot iron griddle until his crêpes are thin and moist. Among the savory fillings, a combo of mushrooms, Roquefort, and scrambled eggs seemed pleasantly salty and sumptuous. The smoked salmon version, overflowing with cold-smoked Atlantic salmon, cream cheese, and dill, put a Parisian spin on Sunday-morning bagels and lox.

For dessert (or an indulgent snack), the Chocolate Lovers crêpe, filled with melty dark Callebaut chocolate and capped with a pouf of whipped cream, handily balanced bitter and sweet. Even better was the Orange Trio, slathered with orange honey butter, drizzled with Grand Marnier, and garnished with golden wheels of fresh orange. A pot of French press coffee, brewed from smoky French-roast beans, made the perfect foil.

Not everything was so successful. Bland French onion soup, made with meat-free stock, lacked both the savory richness and the sweetly caramelized overtones of the traditional. A dryish omelet, stuffed with ratatouille and also-dry chicken bits, failed to impress. And an evening special of chicken saltimbocca — a small, boneless, skinless breast medallion, topped with a square of pancetta and a glaze of salty pan juices — left us gulping water for hours.

We're also crazy about Harlor's earthy pâté, a buttery blend of chicken livers and heavy cream, piqued with thyme and green peppercorns. And, earning its place in our Pantheon of Great Sandwiches, the towering Croque Monsieur, a luscious confluence of lean, honey-glazed ham and nutty Gruyère on batter-dipped challah. Highlighting its savory sweetness, a stroke of creamy béchamel brought on the ou la la.

The Harlors have managed to keep prices moderate: Without wine and with a little plate-sharing, a couple can easily enjoy dinner for less than $35. What they haven't been able to fix is the pacing: On a busy Saturday night, it took 25 minutes for the first course to arrive; on an equally bustling Sunday brunch visit, it was 30 hungry minutes before our food made an appearance.

Given the space limitations, such tedium is inevitable. And it still beats a flight to Paris.