How Does It Feel?

Six actors and their director tackle one very enigmatic songwriter. 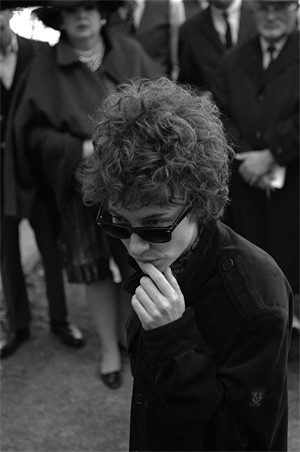 It might sound a little unconventional to hire six actors to play one guy. But Bob Dylan ain't exactly the sort of role just anybody can get a handle on. After all, the legendary singer-songwriter has built his career on reinventing himself many, many times over the past four decades — and often with total disregard for the artist he was just a year before. It's almost as if he is, in fact, six different people. Probably a lot more, actually.

That's why, in I'm Not There, writer and director Todd Haynes presents Dylan as a half-dozen different personas portrayed by a half-dozen different actors. You've got the poet-turned-born-again-Christian, the prophet, the outlaw, the fake, the electric star, and the rock and roll icon. Their stories intermingle and overlap. But the purpose is not to offer a factually accurate depiction of Dylan the man (each character answers to a different name, not one of them "Bob Dylan"); it's to uncover the very core of Dylan the artist.

I'm Not There isn't Haynes' first foray into the music-biopic genre. In 1998, he made Velvet Goldmine, an equally experimental movie that documented the rise and fall of glam-rock via a Citizen Kane narrative structure constructed around a David Bowie-like character. Haynes couldn't secure the rights to the star's story, which is why he settled for a "Bowie-like" protagonist. He didn't want to compromise again. So, fielding a suggestion from his longtime producer Christine Vachon, Haynes pitched I'm Not There to Dylan's filmmaking son, Jesse.

From the start, the director had little hope for the project. Dylan had never handed over the rights to his life story to anyone (save Martin Scorsese, who directed the documentary No Direction Home). To everyone's surprise, the reclusive Dylan said "yes," and Haynes began prepping his labyrinthine screenplay. Hollywood was baffled. Six different Dylans? And wait, they're not actually Dylan? What the hell are you talking about? Time- and character-jumping certainly didn't help matters.

But Haynes — a notoriously detail-oriented craftsman, best known for 2002's Far From Heaven (in which Dennis Quaid got his homo on in 1950s suburbia) — manages to capture the feeling of Dylan in I'm Not There. The movie unravels not unlike Dylan's own poetic narrative and resonates in a similar distinct style.

"Everything came from the music," says Haynes. "But the music and his life so closely constructed the other. They were always in this constant mirroring of each other. I decided the film should be made up of the places where that was most true — where the music and his creative imagination and the genres he was getting into were reflected in some way with his life."

The desire to explore Dylan's life on film first hit Haynes seven years ago. "It was at a time when I was getting back into his music with a fury," he says. "I just suddenly had to hear Dylan. I was encountering stuff I'd never heard before — reading some impressive biographies, reading a lot of the interviews from 1965 and 1966. It was just this great time of pure obsession. And it was in that moment that this concept of looking at him as a series of people, all aspects of his different selves, [emerged]."

Haynes ultimately won the singer's support with a pitch letter that read like a college thesis paper. Haynes thinks Dylan must have been intrigued by the take — but he doesn't know for sure. He never met the enigmatic songwriter; he never even talked to him. "He wasn't involved at all," says Haynes. "He basically just gave the rights to the music and his life, and then he just carried on with his own stuff. He's really not that interested in his own past or people's interpretations of it."

A varied collection of actors plays Dylan in I'm Not There: Cate Blanchett, Richard Gere, Heath Ledger, and a 13-year-old black kid. Christian Bale is the only one who portrays the songwriter during two separate periods. "I wanted to link the protest-era Dylan with his Christian period," says Haynes. "I found similarities in his moral and ethical drives. Both of these periods are very, very different, and they have very different political implications."

Despite winning the movie rights to Dylan's life and making a film that gets closer to the artist than any other cinematic portrait ever has, Haynes admits that he still has no clue who the real Dylan is. "All of these characters run the risk of being unmasked," says Haynes. "They're all adopting a new guise, a new self, and a new narrative that the artist is creating. But that means he's remarkably vulnerable to being discovered.

"And that's true for Dylan," he concludes. "It's almost amazing to think how shocked he would be when people would find him out or reveal truths about his past that he was trying to make fuzzy or more mythical than they actually were."