A local electrician picks his favorite music of 2007. 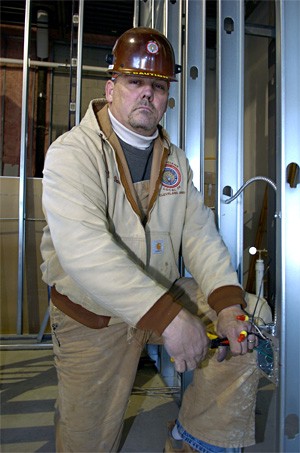 There's a reason the celebrity lineup in our Year in Music issue, which starts on page 6, is totally Cleveland-free: This town doesn't make celebrities. The biggest thing we've got — next to LeBron, of course, who was too busy playing ball to talk to us — is the stripper-lovin' host of The Price Is Right, Drew Carey. But he couldn't be pried away from his medical-marijuana crusade to chat music.

Besides, Cleveland's real stars are the people who make the city what it is: Clevelanders — the paint-stained, beer-drinking, music-lovin' folks who don't need People magazine to make them famous. A couple shots of Jameson and a little "Thunder Road" on the jukebox have a funny way of making you a star — and an expert.

Enter, then, Artie the Electrician (Local Union 38). He's a bandanna-sporting 43-year-old father of four, a Lakewood native who's played in a bunch of bands over the years, including the Cheese Farmers, Ass Crack Holiday, and Buddy Holly's Nipple (all excellently named, by the way). He also was Michael Stipe in Radio Free Europe, the longtime R.E.M. ("before they came out with their commercial, sellout bullshit," he says) cover band.

Artie is a lifelong music nut. He thinks most modern stuff blows ("Daughtry? I just wanna slap him, call him a sissy, and send him home"), but he doesn't just dismiss it, like lots of guys his age do. He's listened to many of the post-Radiohead bands, in fact; he just doesn't like them.

When we asked Artie to tell us what music moved him in 2007, everyone from dead bluesmen to the almost-dead Rolling Stones to the very-alive Kelly Clarkson came up. He even offered to hand over his MP3 player several times; a whopping 40 gigs of tunes revealed just how extensive his tastes are. The mere mention of a band (say, Primus) was met with "I got one of their CDs in my truck."

So, from Artie the Electrician's MP3 player (and occasionally his pickup truck), this is what rocked 2007.

1. Bob Mould — "Sinners and Their Repentances"
"I've seen him every time he's played here. I'd pay $500 to sit in the nosebleed seats at one of his concerts. I liked Hüsker Dü, but I didn't really get into him until [the 1989 solo album] Workbook. That was the album where it all came together. I don't swing that way, but I love the guy."

3. Bad Religion — "21st Century Digital Boy"
"This has a really good, heavy sound. They have an edge to them, but there's a lot of music going on in the background. If you sit down and really listen to it, it's a well-thought-out and put-together song. It's not just three chords. On first listen, it appears straightforward and in-your-face, but there's lots of dynamics going on there. I like to pick songs apart, and this is good stuff."

4. The Dead Boys — "Sonic Reducer"
"They were one of the best bands to come out of Cleveland and the last great band to come from Cleveland. I have this live tape of them, and it's so hilarious. They're so drunk, and they're literally falling down. [Singer Stiv Bators] is like, 'We're here because we need the fucking money.' Then they start ripping into the song."

5. Earth, Wind & Fire — "September"
"They're one of the best vocal groups of our time. And they're musically phenomenal. I have their greatest hits on my MP3 player. It goes from Hoodoo Gurus to Bob Mould to Mucky Pup and right into Earth, Wind & Fire."

6. Colin Dussault — "Whipping Post" (circa 1990)
"I knew Colin when he was putting it all together. I have a version of 'Green Onions' we recorded in my basement in 1986 with me on guitar, and he played harmonica and sang. Now he's Colin Dussault, Corporate Entity. Back then he was Colin Dussault, Balls-to-the-wall-I'll-drink-a-bottle-of-Jack-Daniel's-and-entertain-the-shit-out-of-you-all-night-long. He was a drunk, his guitar player was a drunk, his bass player was a drunk, and sometimes his drummer never even bothered to show up. They're still one of the finer bands in Cleveland."

7. Counting Crows — "Rain King"
"That's silky-smooth music. [Adam Duritz] is the entertainer when it comes to working a crowd. Half the time, the [live] songs sound nothing like the record. When I go see a show, don't give me the record. You gotta do something. With the price of tickets nowadays? Give me a show."

8. Dave Matthews Band — "Ants Marching"
"There's just a lot going on in this song. That whole band is just really good at what they do. They use these unconventional time signatures — it's almost like jazz at times. And the violin player actually fits in with them. You know how some bands use a violin, and it sounds like crap? Not here."

9. The Mighty Mighty Bosstones — "Someday I Suppose"
"People always refer to them as a ska band, but I don't know. Their horns always sounded more out-front to me. And that guy [Dicky Barrett] is a horrible singer. But they're lots of fun."

10. Dixie Chicks — "Sin Wagon"
"Musically, this is one of their finest songs. They're one of the best groups of harmony singers in the business. And they're all really good musicians, especially the fiddle player. I like most of their songs, except for 'Goodbye Earl.' I hated that video with Dennis Franz. I was a huge NYPD Blue fan, and I was like, Sipowicz, what the hell are you doing?"

Honorable Mentions: The Sex Pistols ("You know why? They're the Sex Pistols"), the Cranberries ("They really had some good shit"), and Elton John ("His early years — back when he and Bernie Taupin were banging each other").