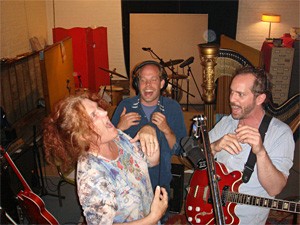 The first sound on Baby Dee's Safe Inside the Day is a spare piano note, struck tentatively and with a ping of sadness. Thirty seconds later, it's followed by a distant, haunting voice — part operatic flamboyance, part off-key casual — singing, "Songs that go forgotten/Are found, remembered, loved, and sung again."

Penned by the transgendered Baby Dee and featuring Will Oldham (in his Bonnie "Prince" Billy guise) on vocals and Matt Sweeney on guitar, the title tune of Dee's new album — which will be released by hip indie label Drag City on January 22 — serves as both introduction to and a statement of purpose for the 54-year-old singer-songwriter, who was born and raised in Cleveland. When she repeats over and over at the song's close, "I will live another day," it feels like a summation of a career that's hidden in the shadows for far too long.

Safe Inside the Day sounds unlike any other indie-rock, pop, or weirdo music you're likely to hear all year. Like Antony & the Johnsons (with whom she's worked), Dee makes piano-based tunes that skirt across folk, classical, rock, pop, and indie-whatever idioms. And they're all delivered in a warbling, androgynous voice that sways from an ear-piercing falsetto to a deep, resonating bass. Dee's songs are strong, spare, and just a little bit spooky.

Dee spent much of her childhood at the movies, watching horror flicks and Three Stooges shorts. She once saw an Elvis film and "couldn't figure out why all these girls were screaming and crying," she says. "Nobody could explain to me what dreadful thing had happened to those poor girls to make them scream and cry like that." She did know, however, that she wanted to make people scream like that too.

When she was six, Dee began taking piano lessons from a "very old" lady named Miss Murcky. "She called cars 'machines' and was constantly fretting about us getting run over by a 'machine,'" says Dee. "Her house was located in what's now the middle of I-71." Dee liked the music, but hated the lessons. "I sorta faked my way from one week to the next," she says. "I'd just play the parts I liked, by ear, over and over and over, until somebody would make me stop."

Dee moved to New York City when she turned 18. "It was cool and exciting and a challenge and full of possibilities," she says. But like many looking for their big breaks in the Big Apple, Dee wasn't an overnight success. In fact, she lived in N.Y.C. for 30 years — working as a circus hermaphrodite, joining the performance-art group the Bindlestiff Family Cirkus, and gigging as a popular street performer — before returning to Cleveland to take care of her ailing parents. She now lives near Brookside Park in a house where she spent part of her youth. "I used to have a recurring nightmare that consisted of nothing more than walking through the front door of the house I now live in," she says. "I guess you could say I've made my nightmares come true."

The home figures prominently throughout Safe Inside the Day. Photos of it are speckled on the cover and inside the booklet. And many of the songs revolve around memories, both old and new, distilled from her life. Dee says the album is about "inside versus outside, real versus imagined, the living versus the dead, and hope versus despair." Yet she cautions against reading too much into them. "There's a bit of distance there," she admits. "There would have to be — they'd be way too claustrophobic otherwise. The proximity to myself would disgust me after a while. I'd want out."

Dee first met Oldham — the part-time actor, onetime Palace frontman, and beloved hipster icon — a few years ago. He brought in pal Sweeney (who's worked with everyone from Guided by Voices to Billy Corgan) to help construct and produce Safe Inside the Day. Synth-lovin' metal madman Andrew W.K. contributes bass; Dee plays piano and harp. "I tend to refer to the songs as dirges," she says of the Tom Waits-like stomps and cabaret boozers that populate the CD. "I can make fun of my songs and be mean to them. It makes me feel safe."

Safe Inside the Day almost didn't happen. After releasing a trio of barely heard albums over the past five years, Dee was about to call it quits. "I [had an] attitude like, OK, I'm done," she recalls. "I've said what I have to say. I'm just going to go out and sing the songs and die." Then Oldham sent her an old hymn. "It made such an impression on me," she says. "I used to be a church organist, but I always avoided the hymns about the second coming and all that shit, because it all seemed completely creepy.

"But that hymn made me wonder why a person would want to live forever — because I certainly didn't. Then I realize that not only did I not want to live forever, but I didn't really want to live at all. Eventually, I rebelled against myself, and that became the song 'Safe Inside the Day,' which is kind of a hymn in reverse. That song is the heart of the album."

Dee says the album's autobiographical tone touches on "shit that happens: life, friends, lovers, mothers, fathers, the living, the dead, and books." It's also about Cleveland. "That part of my life comes through," she says. "And I kind of like it. I feel kind of at home here."

She now considers Oldham, Sweeney, and Andrew W.K. cohabitants of that home. She refers to them as family and to their work together as "a family get-together, where all the crazy, mean, ugly relatives are allowed to belong and are somehow loved in spite of themselves.

"Bad things can exist within a bigger goodness," she concludes. "That's what the album is about. The hidden heart of the thing is rock-solid good, no matter what horrible shit goes on outside of it."