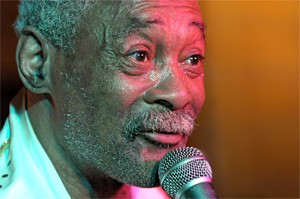 Walter Novak
Nathaniel Mayer got funky at the Beachland on January 18. Watch a slide show from the concert here.

Cleveland's legendary Euclid Tavern (11629 Euclid Avenue) reopens this week with an inaugural set by the JiMiller Band on Friday, January 25. The University Circle bar was open from the 1940s through 2001. Longtime Clevelanders will find the renovated a facility dramatically improved.

From the '60s through the '80s, the bar slid from a well-regarded blues spot to a college hang scene until it eventually turned into a dismal biker bar. Bands like the Numbers Band, the Generators, and Oroboros played the club regularly during long, rowdy nights. House of Swing owner Linda Kallie recalls hearing customers regularly falling down the stairs leading to the basement restrooms between songs.

The Euclid became an alt-rock and underground hot spot in the '90s, when promoter-artist Derek Hess brought in bands like Pavement, the Jesus Lizard, and Cop Shoot Cop.

"The Euclid Tavern provided a venue for bands and a music style that were skipping the Cleveland market," says Hess. "It was a pivotal point and place in Cleveland music history. Once it became established as a club that showcased the heavy and alternative, bands from across the nation sought it out as the place to play in Cleveland."

Young rock audiences didn't drink as much as bikers did, however. And the bar closed in 2001. The new owners frequented the Tavern, but have no connection to the old bar. They invested heavily to repair years of neglect.

The Euclid Tavern is directly across from the Cleveland Institute of Art. With a full kitchen, the club is aiming at older music fans and hungry East Siders. The long list of improvements includes a vintage-style tin ceiling. The stage has been relocated to its original spot, opposite a long bar.

"It was a dive, but it was a fun place," recalls blues bandleader Alan Greene, who will play the bar with Mr. Stress on Saturday, February 2.

• Guitarist Greene will also join blues giant Bill Stuve for two Cleveland appearances this week — sitting in with a pickup band on Friday, January 25, at House of Swing (4490 Mayfield Road) and Saturday, January 26, at Wilbert's (812 Huron Road East). Harmonica player Gary "Big Daddy" Craft, who will also play in the group, put in a word for Greene when Stuve asked about hot local blues players and clubs.

• Members of the veteran punk group the Subtones have reconfigured in a rockier new band, the Dead Enders, which will open the L.A. Guns show at Parma's Jigsaw (1324 State Road, Parma) on Friday, January 25. Take an early listen at www.myspace.com/theofficialdeadenders.

• Following a series of noise complaints from neighbors, the Akron Earthworm Collective has shut down and canceled all shows. The underground indie venue is looking for a new location.

• Roger Hoover and the Whiskeyhounds are now the Magpies. The name change followed lineup shifts that left Hoover as the roots combo's only original member. The band is wrapping a new album with producer Ryan Foltz, the former Dropkick Murphy, whose production résumé includes Elephant Bones. The Magpies open the Elephant Bones show at the Grog Shop (2785 Euclid Heights Boulevard) on Thursday, January 24.