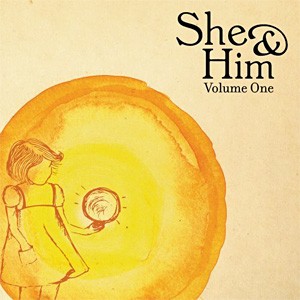 "She" is indie-movie cutie Zooey Deschanel, who played Will Ferrell's love interest in Elf. "Him" is indie-rock auteur M. Ward. But Volume One isn't another one of those records by a Hollywood ego-tripper who fancies herself a singer. In fact, it's a very charming exploration and evocation of pre-Sgt. Pepper pop, stirred by Deschanel's winsome voice. Ward provides the guitar and orchestration, which often recalls the grand arrangements of 1960s pop avatars like Burt Bacharach and the 4 Seasons' Bob Gaudio.

Throughout Volume One, Deschanel comes off like a woman who was forced to grow up too fast, but is determinedly hanging on to a shred of her youthful optimism. "Take It Back" is an ageless set-'em-up-Joe torch song with a shot of twang. In "This Is Not a Test" and "I Was Made for You," Deschanel gives girl groups a spin, sounding as sweet as a strawberry milkshake in July. But she's at her best in the not-quite-a-cappella version of the Motown classic "You Really Got a Hold on Me," where she manages to channel another '60s pop legend — Dusty Springfield. A quiet, graceful gem.