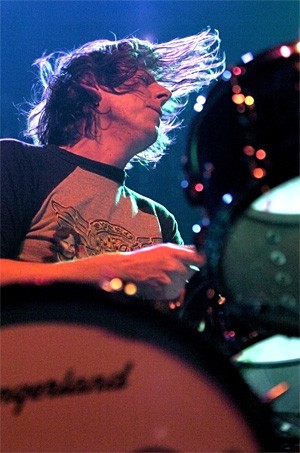 Last week, Punch relayed how the Pretenders' Chrissie Hynde was taking potshots at her hometown of Akron.

It was the latest in a series of digs since the Pretenders' eulogy for Akron, "My City Was Gone," was released in 1984. And at least one prominent Akronite is getting pissed.

No, it's not LeBron, who thinks Kris E. Hind is a backup center for the Raptors. It's Black Keys drummer and rabid homer Patrick Carney.

In the latest issue of Harp magazine, he returns fire. "She was born here, but she also sold the fucking city out and talked shit on the place for years," Carney said. "Akron is so desperate for notoriety that they'll get behind 'their girl' . . . who lives in England! Why play her when you can play some great bands from around here who are trying to figure things out in a town with no jobs?"

Carney says he isn't trying to start an across-the-pond beef, but he doesn't apologize either. "I'm not trying to talk shit. I'm just frustrated that when a magazine calls you, the first two bands they ask about are bands that left town long ago. I guess it's just fucking annoying."

Punch called VegiTerranean, hoping to track down Hynde and spark a seitan-hurling fit of rage. But she was safely back in London, where men named Nigel gurgle blood pudding, and The King isn't some 6-foot-8 guy who can take it to the rack, but a geezer who fancies fox-hunting and looks like an extra from The Other Boleyn Girl.

Unfortunately, her ownership of the restaurant isn't exactly hands-on. "I don't have any way of getting in touch with her," says the manager, "as strange as that is."

Wells Fargo, Come on Down!
It's been more than two years since the East Side Organizing Project, a nonprofit that fights predatory lending, loaded up a bus with angry Clevelanders and drove them to Painesville to unleash vitriol on the home of a Countrywide Financial vice president.

They yelled through bullhorns and pelted the house with some unsubtle symbolism: rubber sharks. A good time was had by all.

The goal that morning — aside from the curative benefits of harassing a bank exec — was to annoy Countrywide's higher-ups into renegotiating its predatory loans in Cleveland.

Though it took two years, Countrywide finally came to the table. ESOP Director Mark Seifert says the two sides are hammering out an agreement to help people escape foreclosure. "It's a good agreement," he tells Punch. "If you had told me three months ago we'd have this positive relationship with Countrywide, I'd have said you're crazy. It almost pains me to say it after two years of going after these guys, but they're really stepping up."

ESOP's next target is Wells Fargo. Organizer Jenelle Dame says the group recently sent a letter to the bank — one of the country's largest subprime lenders — asking for a meet. Last year, the country's fifth-largest bank settled a class-action suit with California mortgage holders for $7 million, after another nonprofit, ACORN, accused it of shady lending.

But lawsuits aren't ESOP's style. "We want to meet with the CEO," Dame says. "If we don't hear back from that, we'll start with the sharks."

Punch will bring the beer and popcorn.

Fred Nance Action Figures
To commemorate the end of Fred Nance's term as chairman of the Greater Cleveland Partnership, colleagues handed out action figures at the business group's annual meeting last week. The dolls were sculpted in the esteemed lawyer's image, complete with bald heads, silk ties, and pockets filled with untraceable currency.

How much the plastic ego-boosters cost is anyone's guess, but insiders say it's slightly less than Jimmy Dimora's Burger King allowance.

The Partnership was apparently honoring Nance's legacy as the most corrupt or incompetent lawyer in Cleveland. Take your pick.

He's the man who supervised the building of Browns Stadium for former Mayor Mike White, a project in which millions of dollars went unaccounted for. He also negotiated one of the worst rip-offs in city history: Cleveland's purchase of the I-X Center for $66.5 million, twice as much as anyone else was offering ["The Sweetest Deal," April 5, 2006].

And now he's negotiating with a Chicago company to build a medical mart. If the deal ever comes through, expect it to require residents to sell their bladders to pay for our end of the package.

But for some reason, business leaders still think of Nance as Cleveland's super lawyer. You really don't want to know what their idea of an average lawyer is.