White Rabbits conquers the underground rock scene, one book at a time 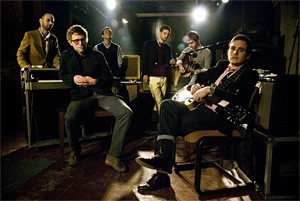 Despite his lack of formal education, White Rabbits bass player Adam Russell has long led a literary lifestyle. He dropped out of high school when he was 16 — years before his band played Late Show With David Letterman and signed to the same record label as Radiohead — because he was frustrated with teachers who regularly kicked him out of class for reading stuff like Moby-Dick, physics texts, and Nietzsche when he was supposed to be paying attention to them.

Over coffee and cigarettes in midtown Manhattan, Russell, who is now 23 and lives in Brooklyn, says he felt less like a freaky outsider once he became friends with classmate Alex Even. "I realized that he read books too," recalls Russell of the kid who became the Rabbits' guitarist.

Growing up in Missouri's remote capital of Jefferson City, the pair regularly made the trip to Columbia — a hip college town 40 minutes away — to shop for CDs at a record store called Streetside. One of the shop's clerks, Greg Roberts (who now plays guitar in the band), offered Russell his house's boiler room as a crash pad. Not long afterward, Russell left Jefferson City and moved into the furniture-free dwelling.

Russell earned cash working at a pizza parlor and a bookstore during this time. After Even graduated from high school and moved to Columbia, the three guys joined a punk rock band with a name so ridiculously punny, Russell is reticent to say it. But we'll tell you: Texas Chainsaw Mass Choir.

Coming to the conclusion that punk wasn't its bag, the trio recruited another Streetside employee, Steve Patterson, and Roberts' friend from St. Louis, Matt Clark, and White Rabbits was born in 2004. Melding jagged rock songs with bits of calypso, ska, and reggae, the group quickly found a following in Columbia. Occasionally using three drummers at the same time, the band began selling out small shows and opening for touring acts (like Sharon Jones & the Dap-Kings) at the city's bigger venues.

Before long, the Rabbits were dreaming of East Coast fame. "Every time a band would pop off, it seemed like they were from New York," says Russell. So, inspired by the success of the Yeah Yeah Yeahs and TV on the Radio, they packed up and moved into a bedbug-infested, railroad-style loft in Brooklyn. After inviting University of Missouri graduate Jamie Levinson to join the group, all six members shared the apartment. Nobody had his own bedroom. "The main reason we moved in was to rehearse together," says Russell of the very close quarters. "It was like, 'I've got a song — let's do it right now.'"

During his first couple of years in the city, Russell supplemented his meager concert earnings by working at N.Y.C.'s celebrated Strand bookstore. "They made me take a test when I first got there," he recalls. "Questions like 'Who wrote The Age of Innocence?' And 'Who wrote Catcher in the Rye?'" For someone whose wide-ranging literary tastes run from Greek classics by Aeschylus to current fiction like Stefan Merrill Block's The Story of Forgetting, the questions weren't all that challenging.

Meanwhile, the Rabbits signed a deal with indie label Say Hey Records. Over the next two years, they played packed shows in New York, released their debut album Fort Nightly, and toured with the National, Say Hi to Your Mom, and Peter Bjorn & John. All six members contributed songs to the record, which — from whimsical opener "Kid on My Shoulders" to twinkling closer "Tourist Trap" — embraces a frenzied, spontaneous, and, yes, literary vibe.

After the Rabbits played Letterman last July, the album picked up some steam. Excitement grew even more crazy in March, when they signed to TBD, a division of Dave Matthews' ATO Records — which is also Radiohead's new home. Because of the one-album deal, the guys can now afford a few luxuries, like their own rooms.

White Rabbits recently shot its first proper video, for the song "While We Go Dancing." The clip was requested by music stations in Germany, where the band is apparently quite popular. "We were trying to get across the concept of guys playing cricket in a four-star hotel and just tearing the place up," laughs Russell. "But we had a hard time finding real cricket players to star in it."

The group — which still writes all of its songs together — is also working on its first album for TBD, which should come out early next year. Russell says the recording budget is slightly bigger this time around, and the band is trying to capture the intensity of its popular live shows.

Though it's still in the early stages, you can bet the new CD will pile on the literary influences that run throughout Fort Nightly. "These guys are like if J.D. Salinger had a band," says the group's manager, Aaron Romanello. We're sure that's a sentiment that White Rabbits, and especially the book-loving Russell, would agree with.