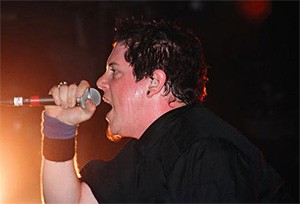 16Volt's Eric Powell wants to know if this thing is on.

After nearly two decades of making music, Eric Powell wants more. The mercurial mastermind behind 16Volt has recorded five albums since 1992, but he still feels he has lots left to say. "I have something to prove," he says.

Last year's FullBlackHabit is no nostalgic throwback. It's a surging statement of purpose from Powell, who returned from a self-imposed exile that was brought on by — among other things — nonstop record-company meddling.

Seventeen years ago, Powell merged his lifelong love of punk music with his newfound interest in electronics. After suffering through ditchdigging jobs in his native Oregon, he stumbled into web design and studio recording. Inspired by Ministry and Skinny Puppy, Powell slapped the 16Volt moniker on a batch of his solo recordings. In 1992, he released Wisdom, and 16Volt became an industrial-music fave, even inspiring a new genre classification: coldwave.

16Volt continued to make noise throughout the mid-'90s on such independent releases as Skin and LetDownCrush. The group then signed to Mercury/PolyGram in 1998 — which turned out to be the start of Powell's perilous roller-coaster ride through the music biz. After releasing SuperCoolNothing in 1998, Mercury switched hands, and 16Volt was dropped from the roster. Powell disbanded the touring group, retired the name, and set out to find a way to reclaim his songs from the record company that now owned them. "I had come to the realization that to have a long career in music, you need to be very self-reliant," he says.

Instead of following his better instincts, Powell resurrected the band in 2005 and signed with Capitol Records. But after tracking demos for almost a year, Powell left the company due to the usual "artistic differences." Indie label Metropolis eventually picked up the recordings and released FullBlackHabit last year. It's 16Volt's first album of new material in nine years.

"I don't want to get mixed up in any more bullshit," says Powell. "I just keep things in perspective and live in the moment."

Still, for Powell, living in the moment means dealing with his past — whether it involves record-company litigation or long-standing issues with his father. Over the years, word erroneously got out that Powell is the son of a label executive, implying that the rocker might have had some sort of inside connection. "My father is the executive of nothing but failures and abandonment," sneers Powell. "He did work at an indie label for a while — before he was no doubt exposed as a pathological liar and an alcoholic."

Over the years, Powell has learned to play well with others. Even though he does a lot of 16Volt's studio work himself, he takes a band on the road. This time around, his touring group includes three guys who've done time with Daniel Ash, KMFDM, and Chemlab. So far, things have been going OK. But check back in a few months. "Are we going to have each others' backs, or are we going to kill each other?" asks Powell. "Touring involves very limited privacy, and we become this bubble civilization."

For its current tour, 16Volt is playing songs from the band's entire career. Powell says the shows are a way to connect with new fans and reconnect with old ones. "16Volt is a passion for me that is hard to put away," he says. "Trust me, I ain't doing it for the money."

And he isn't doing it to merely bask in past industrial glories either. He says that Ministry's recent farewell tour was a giant step forward for the genre. "I don't think Ministry has had anything to do with industrial music, other than being historically anchored to it," says Powell. "These days, you have a bunch of cover bands doing what [Marilyn] Manson, Skinny Puppy, and Nine Inch Nails have already done."

Powell plans to do his part by expanding his own musical experiments with a series of upcoming projects and collaborations, including a band called Graphic that he's put together with OHN's Bill Bildeaux. He's also busy with his production company, two toddlers, and fielding requests from Microsoft, Best Buy, and Coors — all of whom want his music for their commercials.

All this busywork means Powell doesn't have time to be distracted by some of the usual rock-star vices that have plagued him in the past. And despite the seemingly never-ending record-company feuds, Powell remains hopeful. "I am feeling very lucky to be able to do this," he says. "I am not taking anything for granted. I enjoy making records and throwing it all on the line.

"My hope is to get another 16Volt record out next year," he concludes. "I want to be able to just do this again and again — right now."