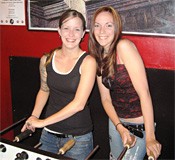 Foosball tournaments have become a way of life during the last three years at John McNeill's Manja nightclub in Lakewood. National-level players are even trekking from as far as the Canton area for a battle of the boards three times a week, on two new "tornado tables" — with Thursdays reserved just for beginners. "Some of the guys that play shoot so fast and so hard that a lot of casual players are, like, 'I don't want to get wiped out.' So we have a lot of pickup games," says McNeill. "It's a great place to learn, because all the people who are really good at the game are also helpful at teaching people how to play it."Here's how it works: Players toss their names in a hat, and McNeill pairs each two-person team based on a drawing. Each squad then plays two best-of-three matches against their opponents. A team wins a game once it scores five points. And the twosome with the best record at the end of the night splits the entry fees taken in before the tournament starts. "When every match goes to the third game and it's a 4-4 score, that's how players like it to be. Nobody wants to play and blow people out," says McNeill. "Everybody's trying to make their game just like pool and darts. And everybody feels like they get it." The tournaments start at 9:30 on Tuesdays, Thursdays, and Saturdays at Manja, 13373 Madison Avenue in Lakewood. Fee is $10. Call 440-915-8002.
Tuesdays, Thursdays, Saturdays, 9:30 p.m., 2008
© 2022 Cleveland Scene