Far Beyond Windows And Eggs 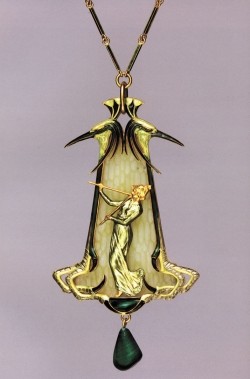 If a poet were to use the words "flower," "butterfly," "diamond" and "gold" as frankly and earnestly as those forms and materials were used by Peter Carl Fabergé, Louis Comfort Tiffany and Rene Lalique, he would be derided as shallow and cliché. No matter how careful the meter or witty the rhyme, those words remain easy, default statements of beauty that can hardly rival the living object itself. Perhaps the more important difference between, say, a sonnet describing an iris and an iris brooch wrought by Tiffany of sapphire and other precious stones is that the poet doesn't have to pay for his "diamond" and "gold." And he doesn't have to go very far out on a limb if no one buys them.

The people with the ability to pay for such ostentatious things, their fashion and the era in which they lived are the crux of Artistic Luxury, an extravagant show on view now in the Cleveland Museum of Art's new east wing galleries, opening for the first time with this exhibit.

That's not to understate the show's allure. The three designers' customers included tsars, princesses, at least one queen and the captains of industry at a time when industrialization was creating money like never before. The objects that resulted are startlingly beautiful, meticulously crafted things, many of which exemplify taste and the kind of wit that works at cocktail parties.

The competition between the designers made the 1900 World's Fair in Paris an opulent trade show, with Fabergé, Tiffany and Lalique all exhibiting works designed to appeal to the wealthiest of the wealthy. Both the year and the three designers' marketing savvy had them and their other competitors straddling aesthetic ideals: Their art nouveaux sensibility was pulled backward by nostalgia and the conservative taste of the wealthy clients, but forward toward the modern as they strived to birth new ideas. That World's Fair also serves as the organizing element for Artistic Luxury. Cleveland Museum of Art curator of decorative art and design Stephen Harrison and his co-curators for the show, Emmanuel Ducamp and Jeannine Falino, have used that event to capture a moment in time: the moment when (as the exhibit's luxuriously illustrated and copiously footnoted catalog quotes art historian John Russell Taylor), "the ripe slips over toward the rotten."

The year 1900 was the end of the decadent Belle Epoc. It was a time when, as the catalog further quotes Taylor, judging "from the paintings of Sargent and Boldini … [one] can get a vivid impression of a carefree world in which the beautiful people of the day never had to worry where their next string of pearls or diamond tiara was coming from." Many objects in Artistic Luxury were presented publicly for the first time at the 1900 World's Fair and are reunited here for the first time since.

Objects in this show are presented to illuminate their history. Wall text tells of relationships, occasions for gifts and commissions. Elaborate hair ornaments, brooches and bodice clasps speak of the many balls that served as showcases for wealth. Functional items - lots of them - reveal that no corner of daily life was too insignificant a place to pour in diamonds and gold. There are tea sets, bejeweled umbrella handles, cigarette cases, cigar cutters, a letter opener and combs, as well as such purely fanciful items as Fabergé's jeweled flower arrangement centerpieces.

Objects by the headline designers are often juxtaposed with similar pieces by their competitors to reveal why the three are better known than their rivals. One such juxtaposition has a tastefully spare enamel pendant designed by Lalique featuring a piper girl dancing between the claws of predator birds displayed next to a similarly allegorical but downright gaudy trinket from the Parisian jewelers Plisson & Hartz, which piles on detail in gold, pearl and diamond until all grace is lost. As Harrison said in showing off the contrast, "They didn't know when to stop."

Another effective comparison is in a collection of bejeweled gold and enamel cigarette cases, mostly by Fabergé, but including one by Cartier, as Harrison says, "trying to be Fabergé."

The material intrigue of the show doesn't end with the precious metal and stone; it extends to the skills of the designers and the new techniques they developed. One spectacular example is a cattleya orchid hair ornament by Lalique, its leaves in gold accented with diamond, but the petals themselves - delicate, their edges sensually ruffled - are made of humble ivory. Other triumphs of material technique include Fabergé's mastery of "guilloche enamel," a visually dazzling effect created by cutting a repeated pattern of wavy lines into metal and laying enamel over the top to create cigar boxes, jewelry boxes and picture frames with the look of glossy, damascened cloth. Tiffany's patented Favrile glass - colors mixed while hot to create iridescent, flowing lines - resulted in richly colored vases and bottles as distinctive as his famous windows.

One marvels at the skill and taste that dominate the foreground of Artistic Luxury, but the show's real intrigue is in the background: the people, history and business that drove the designers' craft.