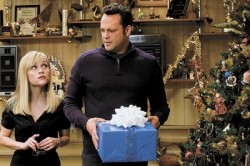 "How can you appreciate someone for who they are if you don't really know them?" Courtney (Kristin Chenoweth) asks sis Kate (Reese Witherspoon) in Four Christmases, a holiday-themed rom-com co-starring Vince Vaughn. So, for 90 minutes, Kate and Brad (Vaughn), a couple for three years, get to really know each other. But it turns out that they really don't like, let alone appreciate, each other afterward.

Kate and Brad are a successful, self-centered San Francisco couple, clearly in love. They're the kind of people who take dance lessons - not because they're planning to get married someday, but because they like trying new things together. They play sex games in public. They don't want kids. And they sure don't want to spend the holidays with their families.

After telling their divorced moms and dads that they'll be away at Christmastime inoculating kids in some third-world country (they're actually planning a Fiji vacation), Kate and Brad are grounded at the airport because of fog. A television reporter interviews them, and before the cameras have stopped rolling, their parents are ringing their cells. Without a handy excuse, Kate and Brad are roped into spending the day with their moms and dads and their respective households.

When most Americans think of French cinema, they think of Godard, Renoir, Truffaut and other stalwarts in the field of what are generally considered art films. Director and producer Luc Besson seems intent on single-handedly changing this. His international success with films like Le Femme Nikita, The Professional and others has allowed him to set up shop as sort of a Gallic Roger Corman. In that capacity, Besson has produced a string of genre films including the Transporter series starring British tough guy and Guy Ritchie repertory player Jason Statham. The Transporter films are unlikely to wind up mentioned alongside such classics of world cinema as Rules of the Game or The 400 Blows, but they do make money. Directed by the wonderfully named Olivier Megaton from a script by Besson and Robert Mark Kamen, Transporter 3 seems to have been written by taking the first film's screenplay, crossing out the names of the supporting characters and substituting new ones. Add a few new stunts and fights, and you've got the movie.

The film is Statham's third go-around as driver-for-hire Frank Martin, and once again, Frank has to deliver a package for some bad guys. It's no surprise that said package is an attractive young redheaded girl (Natalya Rudakova) who also doubles as Frank's love interest. His job is to keep her safe from a group of thugs out to get both her and him. That's the primary plot. All the while, Statham finds various ways to get his shirt off, preferably while beating up the usual assortment of henchmen. And for series fans, Franois Berléand returns as Frank's friend, Inspector Tarconi. Aside from Statham's undeniable screen charisma, Transporter 3 is a pretty typical Grade B action film. It's got just enough plot to string together the action scenes and it's full of utterly ridiculous moments, but it does deliver the goods if you like car chases and karate chops. - Robert Ignizio