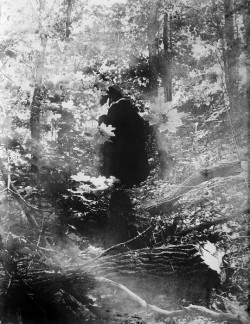 The artist T. R. Ericsson stands in the woods wearing a dark suit. Each of the 13 graphite-on-paper works in his solo exhibit, Narcissus, now at Shaheen Modern and Contemporary Gallery, shows him in a slightly different position, but always with his head bent, hand to his ear. This gesture would have meant nothing 20 years ago, but now, of course, we recognize at once what's going on: The guy's talking on a cell phone. In his distraction, like Dante in the opening lines of The Inferno or the mythical Narcissus ignoring the nymph Echo, Ericsson appears to have wandered off the path; in several of the pictures, he stands knee-deep in weeds, his shins blocked by fallen branches.

One might think "more gosh-darn irony - post-modern man locked into himself, oblivious and immune to nature, estranged from experience (what a jerk!)." But there's an atmosphere in these "drawings," as Ericsson calls them, an air of romance and elegy that isn't at all ironic. The figure seems not merely self-absorbed but poised at the threshold of another world, about to be beamed up, or maybe down, and not because he's chatting with his starship: The vision is too classical, too cloud-wracked and poetic. In these drawings, graphite is forced through a silk screen in process that is laborious and physically taxing, despite beginning with digital files. The result resembles photographs that have undergone transformation at a molecular level - charged with pixie dust, infused with a sincerity that reads as psychically energetic, even spiritual.

The artist's face is all but invisible - blurred and averted. In several of the drawings, he's seen at a distance of 20 yards or more, a figure in a landscape. Nothing about him is certain, not even his appearance. Questions arise. If this person is, in some sense, Narcissus, where is Echo? Is she the photographer? And if not, who is? Nor does a closer look help to clarify how these pieces are made. Whether viewed from an inch away or across the room, they are unsolvable, partaking equally of photography and the gritty, fire-born qualities of charcoal drawing. The seamless mix is visually frustrating and, for that reason, slightly disturbing. And the mystery of their manner of production gradually lends the puzzle of their vantage point more urgency: In fact, who is following this young man around and with what intentions? Is he being recorded, spied upon, stalked? Ericsson defines presence from the viewpoint of absence in drawings which drift toward cinema in their frame of reference, tinged with the wireless paranoia of a brand-new style of loneliness. "When?" is not among the questions asked by these works; the time is now.

THERE'S A BACKSTORY to the works in Narcissus that answers some of those questions and pretty much contradicts their apparent narrative content. It's not printed on the wall or available in a pamphlet, but it is hinted at in a secondary exhibit of Ericsson's work, currently on view a few miles away at the Sculpture Center in University Circle. Called Thanksgiving, that show consists of a five-foot-square, two-inch-thick black granite slab resting just millimeters above the battered floorboards of the storefront gallery space on Euclid Avenue.

If the images of Ericsson at Shaheen show a slightly disheveled young man - formal white shirt untucked, collar open, tie discarded - looking as if he had just stepped away from a wedding party or a funeral for a moment's conversation with a friend, that's not far from the mark. Over the past few years, several deaths in Ericsson's family culminated in his mother's suicide. During this period, he asked his 16-year-old brother to take a few digital shots of him wandering in the woods. The artist told me that he forgot about the camera on that late summer afternoon as he got lost in conversation with a friend who had troubles of his own.

Audiences peer down at the inscription on the stone like Narcissus gazing into his pure woodland pool. Etched on the polished granite are more than a thousand words of text, completely filling the dark surface. The word-for-word transcription of a 1992 letter that Ericsson's mother wrote to him after he left home to go to New York gives an account of the family's Thanksgiving. It quickly becomes clear that Ericsson was lucky to have missed this particular occasion. Like a scene from an Edward Albee play, Mrs. Ericsson's description of the car ride with her parents to dinner at her brother's house is a sharply drawn sketch of the way family members ignore, misunderstand, abuse, blame and hold one another responsible for the pain of living. We recognize all this from our own experience to a greater or lesser extent; it seems only appropriate to see our own images floating in the dark stone behind the bitter words. And yet the letter ends on a nearly upbeat, defiantly loving note: "Be happy and carefree forever = Do it your way and tell the rest to shut up. Love Always."

Ericsson makes work about people, places and things that aren't there - which is what every work of art does, but rarely with such active fidelity. His drawings don't seem as much like windows cut in the walls of the present as electronic screens buzzing with a presence of their own - not a view, but a rival perspective. It's difficult to finish looking at an Ericsson piece, perhaps because his work seems, like Narcissus, to be busy with its own, very private agenda. Every work of art is careless of the observer and cruel to the advances of desire, but Ericsson finds ways to intensify such estrangement. After reading his mother's letter twice and regarding the way the tomb-like slab expands under the eye - a pond full of words not rectangular like most gravestones but square like the foundation of a pyramid - I slipped back into my own mind unobserved and walked away, as if I had gone skinny-dipping in a different life.Ê