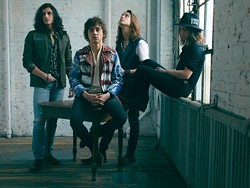 Michael Lavine
The up-and-coming hard rock band Greta van Fleet came together about five years ago in Frankenmuth, Michigan, of all places.

Guitarist Jake Kiszka had originally started playing in a duo with a drummer he knew from high school, and the band began to take shape.

Inspired by acts like the Beatles, Allman Brothers, Howlin' Wolf, Elmore James and Muddy Waters, the group put out an EP last year and played a sold-out show at the Grog Shop on the tour in support of the release.

Earlier this year, Greta Van Fleet announced the dates for a headlining tour. Cleveland wasn’t on the original schedule, but the group has just added a slew of gigs and will now perform on July 31 at the Agora Theatre.